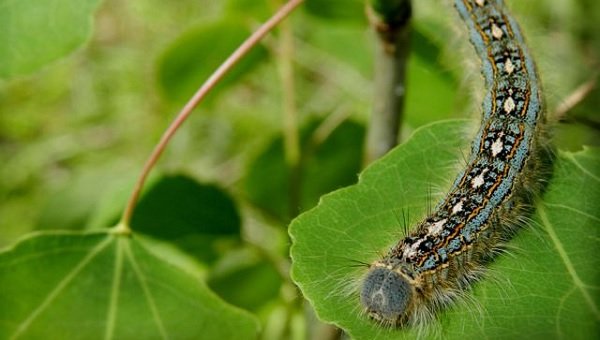 Insects could restrict how well trees absorb and store carbon in the future, according to a new study. In experiments simulating carbon dioxide levels in 2050, insects munched their way through almost double the number of leaves than under current conditions.

With fewer leaves, the trees are likely to become less effective at absorbing carbon dioxide from the air, the researchers say.

Trees are the biggest carbon sink on land. Through a process known as photosynthesis, trees convert carbon dioxide, water and sunlight into the fuel they need to grow, locking up carbon in their trunks and branches as living biomass.

Research suggests that when there’s more carbon dioxide in the air, trees grow more quickly because the rate of photosynthesis speeds up. This is called ‘carbon dioxide fertilisation’.

Scientists expect that as human-caused carbon dioxide emissions increase, forests will absorb and store more carbon, assuming they have enough water and nutrients to grow.

But the results of a three-year experiment, just published in Nature Plants, suggests that insects, such as caterpillars, may make it harder for trees to absorb this extra carbon by munching their way through the trees’ leaves. With fewer leaves to absorb sunlight, the trees can’t photosynthesise as much, and they absorb less carbon dioxide from the air.

The researchers set up their experiment at the Aspen FACE facility (Free-Air Carbon Dioxide Enrichment) in Wisconsin in the northern US. At the facility, birch and aspen trees are surrounded by vertical vents that release different gases to simulate future conditions. The researchers set the experiment to create a carbon dioxide level of 560 parts per million (ppm), which at current emission rates we’re due to reach soon after 2050.

They then monitored the amount of leaves the insects ate their way through, and compared them to trees without the extra carbon dioxide.

The results show that under high carbon dioxide levels, the bugs ate 88 per cent more leaf material than under current levels. And by eating more leaves, the insects reduced the amount of carbon dioxide the trees could absorb by around 35 per cent, the study says.

So the insects affect the trees in two ways, Dr John Couture, a biologist at the University of Wisconsin, tells Carbon Brief:

“It’s kind of a double whammy: not only is the leaf area removed, but the potential growth that the removed area could have produced is not realised.”

But what turns the caterpillars into very hungry ones? Higher carbon dioxide levels alter how the trees use nutrients, such as nitrogen. This typically makes the trees’ leaves less nutritious, so the insects have to eat more to gain the same amount of nourishment, the researchers say.

The study is the first to conduct a large-scale open-air experiment on the impact of insects, the researchers say. Dr Philip Wheeler, an ecologist at the Open University, tells Carbon Brief he thinks the work is an important addition to research into forest responses to rising carbon dioxide:

“It shows the value of these really impressive large-scale experimental setups that aim to look at ecosystem effects out in the real world, not in growth chambers or greenhouses.” But like all experiments, it’s important to understand its limitations, Wheeler says:

“Trees are very long-lived organisms. In this study, the forest systems investigated were relatively young, and the study was carried out over a short period of time relative to the lifespan of the trees it measured. It’s quite likely that at different ages, trees will respond differently to both elevated carbon dioxide and insect herbivores.”

The researchers say they can’t be certain that they would see the same effect for forests in different parts of the world. But without considering the impact of insects, they say, scientists may be overestimating how much carbon dioxide forests will absorb and store in the future.

The researchers recommend that climate models should include the impact of insects on ecosystems. But this has its own challenges, says Wheeler:

“While the paper demonstrates that we probably need to factor in insect herbivores in climate models, it raises many more questions about exactly what effects these herbivores have in real-world forest systems. Really major challenges remain in figuring out how to study these sorts of phenomena in ways and at scales which can start to inform climate models.”

So it may be a while until scientists have the information they need to incorporate the impact of insects into climate models. But the study shows that even tiny insects can have a big climate impact.