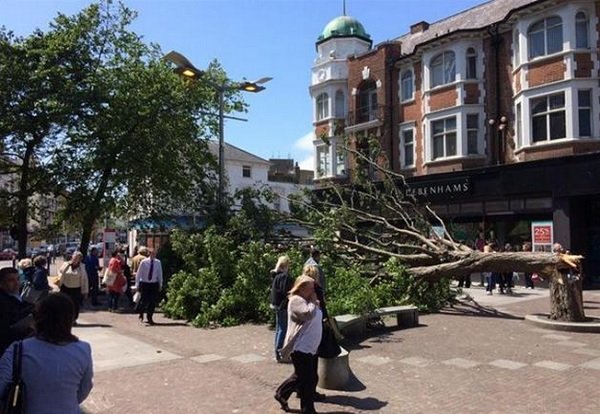 Shoppers had a lucky escape when a large tree came crashing to the ground in a busy town centre this afternoon.

The tree fell in the middle of Sandgate Road in Folkestone as shocked people looked on.

It is not yet known what caused the tree to plunge – just feet from a seating area – but it could be due to strong winds.

No one is thought to have been hurt after the tree fell at around 1.30pm.

Joe Brady, director of Recruitment Solutions, in Sandgate Road, was just leaving Debenhams when the tree came down.

He said: “You could actually hear the trunk breaking.

“It is a miracle no one was hurt. Where it fell is close to the benches, and people often sit there.

“On another day it could have killed someone.

“The pictures don’t do it justice, it is a huge tree, with huge branches.

“It is windy today, but not windy enough that I thought it could bring a tree down.”

Kent County Council said it was aware of the incident and council staff are on the scene.

A spokesman added: “We have arranged for a tree surgeon to clear the tree.”

They added they were expected to arrive this afternoon.

Folkestone Town Centre Management spokesman Matt Davidson said: “We had a report saying the tree had fallen over.

“It was quite a large tree but luckily no one was injured. Kent County Council is now dealing with it, although we don’t know at this stage what the process is for removing it.”

Kent Police said it had been notified but the incident was being dealt with by the town centre management and the council.

A spokesman added there had been no reports of any injuries.

The Met Office had forecast it would become more breezy during this afternoon but only predicted gusts of wind of up to 35mph.

Crowds of people have been standing around the broken tree taken photos.

Other witnesses said they did not think it was windy enough to bring a tree down despite quite strong gusts.