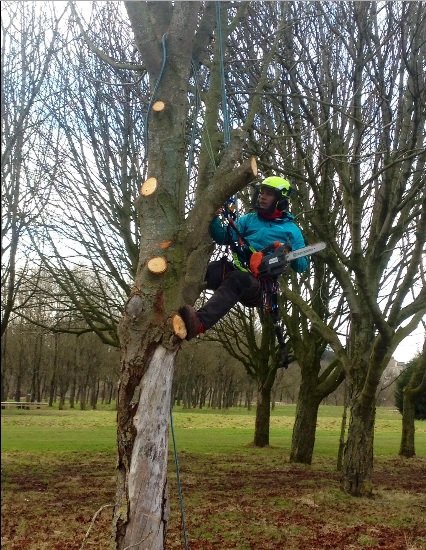 Esther Sands decided to pursue chainsaw qualifications after helping out with her boyfriend’s successful tree services company which covers a range of work across the Lake District.

And now she has become the first British woman to qualify to operate chainsaws in trees and also to conduct aerial rescues.

“It means a huge amount to me to now have the skills and certification to be able to work up the tree,” said Esther, a 26-year-old physiotherapist.

“I know there aren’t many female arborists due to the physically strenuous nature of the work, but it’s pretty special to be the first registered female British tree climber on the register.

“I really enjoy working outside with nature and it’s great to be able to help the business grow. We carry out all aspects of tree work both domestic and commercial, so the jobs vary from small tree pruning to large tree dismantles and felling.”

“A few months ago I wouldn’t have imagined I would be climbing and reducing some of the trees I have been working on recently. Now I have got the qualifications I am really keen to develop and expand my skills and experience with tree work.”

Esther grew up in Far Sawrey but now lives in Kirkland, near Cockermouth, with boyfriend Paul who set up Precision Tree Services in 2012.

She said she will continue working as a physiotherapist but will work alongside Paul when time allows.

Visit www.precisiontreeservices.co.uk to find out more.