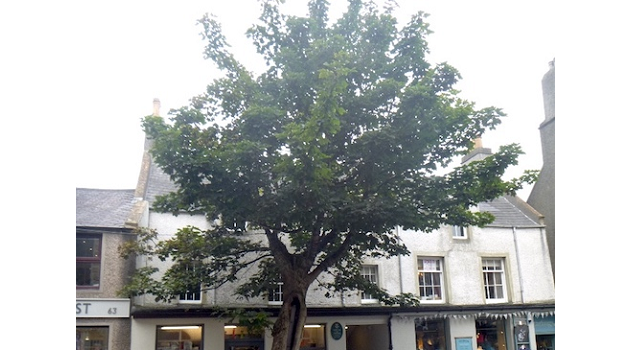 The 200-year-old sycamore, which stands on Albert Street, will undergo crown reduction and thinning work, which will prune the tree back, from today, Monday.

This follows on from an expert survey of the tree which found that, although the tree was flourishing, its canopy was becoming too heavy for the main part of the tree to hold up, presenting a risk of branches breaking off. The work being carried out this week will also reduce the amount of foliage and allow more light through.

The tree was recently shortlisted in the Woodland Trust’s ‘Scotland’s Tree of the Year Awards’.

The work will be done by a qualified tree surgeon and done in such a way that maintains a balanced shape. A further survey will also be carried out to see if more work is required.

Gavin Barr is Orkney Islands Council’s Director of Development and Infrastructure Services. He said: “The Big Tree is an important Kirkwall landmark and we want to keep it in good condition and in place for as long as it remains safe to do so. This work is being done in accordance with our long-term strategic care objective for the tree in order to ensure its well-being and protection and won’t endanger it in any way.”

The Big Tree is a well-known and much-loved landmark in Albert Street in Kirkwall, used as a meeting place by generations of Orcadians. It originally stood with two others in the grounds of a grand house. In the 1870s a new owner felled two trees causing public outcry which saved the third. As Kirkwall grew the Big Tree eventually found itself in a street rather than a garden.

In poor health due to its challenging location and its hollowed out trunk supported by a metal rod which the council installed as a support measure in 2009.