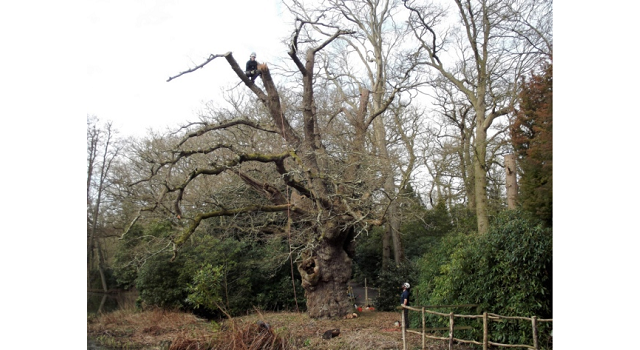 The King Oak at South Walsham’s Fairhaven Woodland and Water Garden has been given a ‘trim’ to ensure longterm health.

The oak tree is believed to have been a sapling at the time of the Battle of Hastings, and is one of the oldest trees in Norfolk.

Matt Jordan, head forester, said: “We give the King Oak an annual health-check, along with regular visual inspections, looking for broken limbs and aggressive fungi.

”We had planned to do some tree surgery last autumn, but a hornet’s nest prevented the work. So it has been good to get back up the tree and carefully remove some of the reactive growth that has appeared following the reduction in the size of the crown four years ago.

“The tree is strong and healthy, but by thinning out the four year-old growth, it will allow more air and light into the crown and encourage new shoots and a successful growing season.”