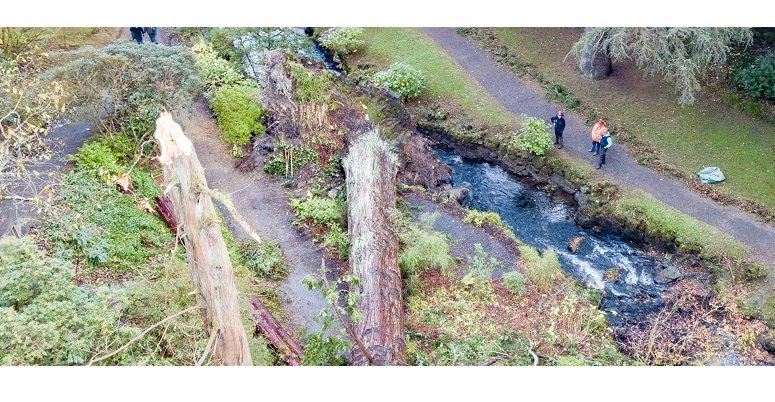 Storm Arwen’s galeforce winds brought down swathes of trees across the north of England and Wales, including some of the most exceptional specimens in the charity’s care.

The full extent of the damage was still being assessed on Wednesday, the National Trust said, but the restoration was likely to amount to at least £3m.

Staff were left in tears after Storm Arwen hit some of the organisation’s most beautiful landscapes and gardens.

At the world-famous Bodnant Garden in North Wales, over 50 trees were uprooted including a 51m ‘Champion’ coast redwood – the largest of its kind in Wales – and many hybrid rhododendrons that are unique to the property.

The charity has described the damage as a ‘huge blow to British heritage’.

Andy Jasper, head of gardens and parklands at the National Trust, said: “In horticultural terms, what has happened at Bodnant is highly significant. We’ve lost some of our most important and earliest specimen trees and unique rhododendrons – and the extent of the damage is still unfolding. It’s a huge blow to British heritage.

“With it being National Tree Week we had expected to be celebrating the extraordinary trees in our care – not witnessing the scale of destruction we have. But this week has taken on a new significance for us, and we’re asking our supporters to donate, if they can, to help us restore the places affected.

“Our gardens and landscapes will take months to clear up and years, even decades, to fully restore. Some won’t be the same again but I have no doubt that our amazing teams will recreate these much-loved places and reopen them for everyone to enjoy. We will also make sure that this restoration work is as resilient as possible to extreme weather events of this kind, which are becoming ever more common as the climate changes.”

At Wallington, in Northumberland, over half of a ‘generation’ of veteran trees were lost as winds reached speeds of up to 98mph in the region.

Staff at the estate reported the worst destruction caused by a storm in 40 years with thousands of fallen trees, including over half the 250-year-old oak and beech trees planted by Sir Walter Calverley Blackett, as well as the Atholl Larch – the last remaining of six larch trees given to the property in 1738 by the Duke of Atholl – which had been split in two.

The property is without power, phonelines and water, and all footpaths are blocked.

Storm Arwen struck on Friday with galeforce winds and snow hitting many parts of the UK.

On Wednesday, Lake District staff were still counting the number of trees to have fallen, with the final total expected to be in the thousands.

Hundreds of trees have been lost on historic estates such as Wray Castle on the west shore of Windermere, Fell Foot and Sizergh near Kendal, with many footpaths still closed.

In places such as Tarn Hows, a 19th Century designed landscape once owned by Beatrix Potter, fallen trees and debris are blocking access roads and paths, making rangers’ job of assessing the damage even harder.

Other properties that were badly affected included Hardcastle Crags in West Yorkshire, Erddig near Wrexham, Cragside in Northumberland and Attingham Park in Shropshire.

The Trust is asking supporters to donate what they can to its Woodlands fundraising appeal to help with restoration now and in the future: www.nationaltrust.org.uk/woodlands-appeal.

The clear-up at Bodnant alone is expected to take several months.

Acting head gardener at Bodnant Garden, Adam Salvin, said: “It’s been a real shock to staff and volunteers coming in to see the devastation caused in one night. There have been tears. We’ve seen storms and floods here before but this damage is on a scale not seen in living memory.

“The area worst affected is Furnace Wood where we’ve done major renovation work over the last decade. The storm has ripped through that hillside. It’s very hard to witness. But nature will recover. We will bounce back.”

Donations can be made via the National Trust website: nationaltrust.org.uk/woodlands-appeal.