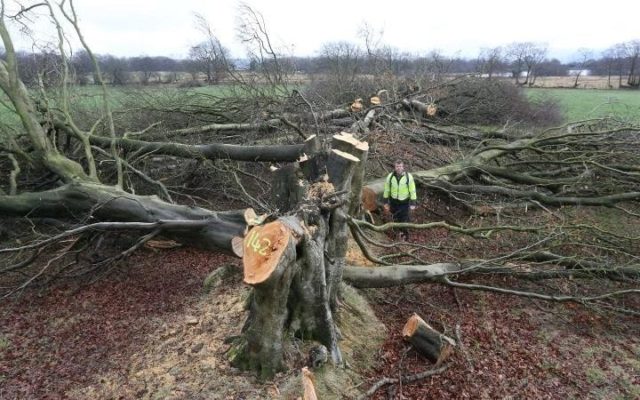 An investigation has been launched to find out who is responsible for chopping down the 200-year-old ancient beech trees.

Environment officers have begun work after the “devastating” discovery last week, where all that remained of the trees, which can reach up to 100ft high, were tiny stumps.

The high branches were left sprawled across the ground as the trees, dating back 200 years, were seemingly brought down with a chainsaw.

A spokesman for Natural Resources Wales, who are carrying out the investigation, said inspectors were visiting the countryside in Blackwood, near Caerphilly in South Wales, last week when they came across the scene which was reported to them over Christmas.

Natural Resources Wales, the enforcement authority investigating the felling, launched an inquiry – pointing out that anyone who wanted to fell trees would require a licence.

A spokesman said police are not involved at this stage, but would be informed “if appropriate to do so”. Perpetrators face significant fines if found guilty of an offence.

Jim Hepburn, Regulatory Woodland Officer at Natural Resources Wales, said: “This is a devastating case which will have a terrible impact on the local environment and will no doubt be very upsetting for local people.

“These trees would have been around 150 – 200 years old and would have provided a valuable habitat for wildlife.

“We continue to investigate how this felling has happened, and will take the necessary action against those responsible.”

Anyone convicted of unlawful tree felling can face fines of up to £2,500 or twice the value of trees – depending on which amount is greater.

Natural Resources Wales can also serve a restocking notice to a landowner or tenant, ordering for replacement trees to be planted.