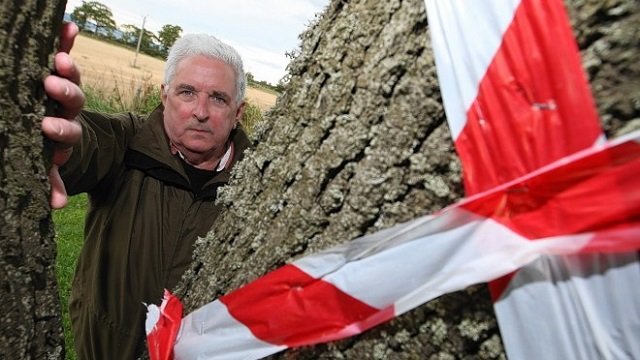 An Inverness resident has launched a one-man campaign of direct action to save a row of 100-year-old trees from being chopped down to make way for a new road.

William Aitken decided yesterday to put up placards and red-and-white tape around the 17 “under threat” oak trees at Caulfield Road North in the Highland capital.

The 65-year-old said the protest intended to alert members of his community to the potential impact of plans to build a new single carriageway linking the A9 Perth road to the A96 Aberdeen route.

The long-awaited East Link scheme is designed to ease congestion in the city.

It would cross the Inverness-Perth rail line and connect Inshes to the Smithton area, at a cost of between £25million and £55million.

Transport Scotland is currently consulting on six designs for the project, but Mr Aitken said officials from the agency had told him that all of them would require the removal of the trees as part of a widening of Caulfield Road North.

He is urging other local residents to register their opposition before the end of the consultation on October 7.

Mr Aitken, of Orchard Park in Cradlehall, said: “There are about 17 oak trees there between 100 and 130 years old. They are going to chop them all down for the new road.

“I did it to raise awareness of this actually happening. Nobody knows that this is part of their plan.

“It’s just a big yellow line their plan – but when you ask them they say they are going to widen the road and get rid of the trees.

“I’m trying to raise awareness of local residents up here before the consultation ends.”

Transport Scotland did not deny Mr Aitken’s claims last night, stating instead it was “too early” to know because further detailed design work would be carried out after a favoured option was selected, and it would be influenced by the consultation responses.

Inverness South councillor Ken Gowans said: “I think everyone would be in favour of protecting 130-year-old trees if at all possible, but my understanding is that no decisions have been taken, these are just options that are being consulted on.”

A Transport Scotland spokesman said: “We are now considering the comments from the public exhibitions as we work towards identifying a preferred route option next year to improve the road network around Inverness and improve road safety for all users.

“The closing date for comments is October 7 and we would encourage anyone with an interest in this scheme to give us their views.”