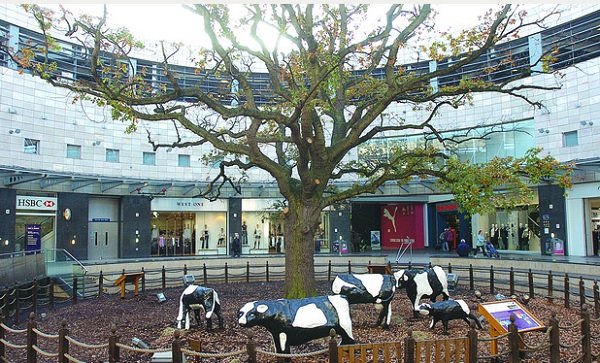 Intu Milton Keynes has had confirmation from the Arboriculture department at Milton Keynes Council that the oak tree in Oak Court is dead.

The protected oak tree has been a great symbol of the multimillion-pound shopping centre after the former Midsummer Place had to be built around it because of its heritage.

Speaking to Three Counties Radio, Bernard Nichols, a former builder on the site, said a team wrongly dug out drainage pipes when a new section was built, meaning the oak often sat in up to two feet of water when it rained.

A spokesman from the shopping centre said: “This week, we have had confirmation from the Arboriculture department at Milton Keynes Council and an independent landscaping company that the oak tree in Oak Court is dead. They have checked for secondary root growth since their last visit in 2013 and there is none.

“They have also suggested that the tree could become unstable, therefore we need to respond appropriately.

“Our first action is to further cut back the branches to ensure that, should any branches fall, they do so within the cordoned off area. We will also erect signs to stop the public entering the area, which will be enforced by security 24/7. However, we will not be removing the tree at any time soon until further investigation.

“We will work with the council on the next stages of their recommendations and respond accordingly.

“We are naturally saddened by the decline of the oak and this latest news. Over the years, every effort has been made to stimulate growth, including artificially draining water, trimming the branches to encourage epicormic growth and mulching and feeding the tree with nutrients; but sadly to no avail.

“When it was realised that the tree was in a declining state – in 2005 – the centre management team worked with The Parks Trust and local schools to harvest acorns from the tree and plant 100 saplings from the oak.

“Today, these saplings are doing well with some already growing to 10ft tall and spread across open Parks Trust land in two locations.

“We know how important the tree is to Milton Keynes and its community and it is now our responsibility to respect its heritage and the sensitivities of removing it.

“We will be asking the public how they would like to remember the oak; perhaps as an art piece made from its wood or a plaque?”