An Interview with Nick Eddison: Burleys 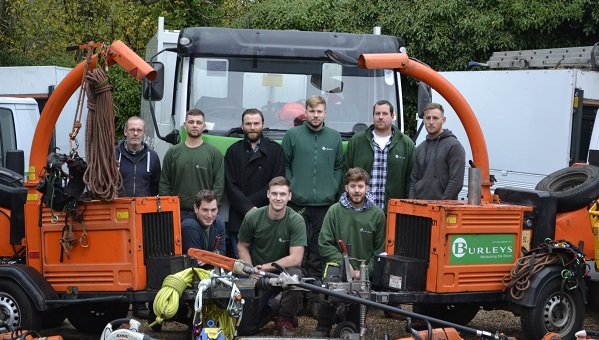 Pro Arb were given the opportunity to interview arboriculture manager Nick Eddison, who is relatively new to the Burley’s team, having joined in July last year. But with plenty of hands-on experience in the industry, he plans big things for the company.

How long have you been in the industry and what made you think there was a career in it?
I’ve been in the industry for 20 years. Initially I was working as a landscape operative doing hard landscaping for a small family firm in Newick, East Sussex. There was quite a lot of tree work and the other guy in my team was a qualified tree surgeon. Soon after, the firm we worked for folded and he and I offered ourselves out as a landscaping team. We were taken on by KPS Contractors, who at the time didn’t have much of a landscaping division. There wasn’t enough work for us to be fully employed as landscapers so we were put to work with the tree teams and I just found I had a natural talent for it. I started doing climbing work with them quite quickly and as soon as I started climbing I fell in love with the work. I think that was one of the best introductions to the industry I could have got.

Do you think people realise how physical the work is? Some teams are on call 24 hours a day…
I don’t think being on call is much of a factor because you don’t get many call outs and if there are emergency works, you do get paid well for it. I don’t think young guys coming into the industry understand exactly what is required. The job is for some people and not for others. I’m on the industry forums online and I always see people selling kit who obviously thought the industry is going to be easier than it is. The reality of the industry can be different from the imagined.

What formal qualifications do you have?
I’ve got the CS tickets that are necessary to be a qualified tree surgeon so that’s 30,31,34,36 and 39. That’s basic chainsaw maintenance, cross cutting and felling of small trees. I also have tree climbing and aerial rescue and then operating a chainsaw from a rope and harness. I’ve had those qualifications for 10 or 15 years and I never got any more qualifications apart from getting a MEWP (mobile elevated work platform) ticket. I think that’s essential for any practising tree surgeon. A lot of large commercial companies started doing work on construction sites and the health and safety legislation from the construction industry started to apply to tree surgery so we had to have CSCS qualifications and things like that. That was it for 10 or 12 years. My wife then suggested I went back to college to get more education so that’s what I did. I did the level 4 arboriculture qualification. Because I was running my own business at the time I managed to find the time to dedicate to the course.

Where did you do that course?
Merrist Wood. Before I started in the industry I did a degree in politics, philosophy and history and I can honestly say that doing the level 4 arb course was much more of a challenge. That qualification is the entry level consultancy qualification. You have to know everything and it’s such a wide subject. I went from being an expert in one field, the operations side of things, and knowing how to prune a tree in the best way for the tree to grow, to really understanding the whole subject a lot more. What was interesting about that was I really got into the biology and botanical side of it which I’d never really thought would happen. At school I was useless at scientific stuff. The whole process of studying reinvigorated my love for arboriculture.

What did you when you finished the course?
I started to branch out into doing consultancy work such as hazard assessment or planning reports. I ended up working for a couple of ecology companies and doing the BS5837 reports and doing stuff like that. At the same time I was struggling a bit financially, I had a lot of trouble getting paid on time and I had a young family and I was the main bread winner. I was always looking around for a job as an arb manager because of my basis in the practical side of the work. When the job at Burleys was advertised, I fired off a CV and just wanted to see what happened. I got an interview and was impressed with Richard Burton, the MD

So how long have you been at Burleys now?
I started working for Burleys at the end of June last year, so I’ve had over 6 months here.

What’s your day to day role here?
It’s a combination of administration, administering the teams, ensuring that they have got all they need to go out and do their work successfully and mainly that is on the paperwork side of things. I’ll deal with the preparation for a job and I’ll make sure that they’ve got a site specific risk assessment, I make sure they know where they’re going, have plans and instructions for the jobs. I make sure the client has a method statement and all of the COSHH (control of substances hazardous to health) assessments. The operational side of things such as tools and vehicles is handled by my assistant manager. I have lots of client liaison and client development too. As the Burleys arboriculture team grows, I see my role becoming a lot more strategic. As we start to win larger contracts, I’ll be employing contract supervisors. I’ll then be more strategic. I do quite a lot!

What’s the structure of the arb side of Burleys?
I’m the arboricultural manager and then directly below is Dave McCaffrey who is my assistant. Last year Burleys went through a big restructuring process as a result of acquisition by TCL Holdings and so in that process we lost a few guys. I was brought into the arb department and there was someone here in this department as an operations manager and he didn’t want to take on the role of assistant arb manager so he left and I had to find a replacement. We had the opportunity to promote from within the company so we did. The ethos of the company is to reward the people who put the time in so Dave became the assistant manager. At the moment we have 3 to 4 teams. We are just at the point of running 4 teams all the time. Sometimes we have 3 teams going out, but it all depends on recruitment, which I’m finding difficult.

How many guys do you have in the arb department?
At the moment we have 11 operational staff plus Dave and me. We need 12 operational staff as a minimum to run four three man teams which is the standard unit. There are many occasions when we divide the staff up depending on the individual circumstances of the jobs that the guys are required to do. On vary rare occasions we sub out work to known and trusted sub-contractors. We also sub out consultancy services as I don’t have the time to do it myself.

Is there enough work out there then?
I think there is, yes. Arboriculture is in my experience, distinctly divided between commercial and domestic work and I think that a lot of people, when they get into the industry are charmed by the idea of working for themselves and also by the rugged macho image of the industry. But I don’t think you make a good tree surgeon unless you have done commercial works because you need to be able to deal with all the pressures. Having been a one man band and having a small business myself, if I hadn’t have had a sound basis in commercial arboriculture; it would’ve been hellish to be honest.

Do you get involved with the associations?
I think the Arb Association is a fantastic organisation. My big project for the first quarter or third of this year is to get Burleys accredited. It shows that you are serious about your work and you take pride in the standard. Arboriculture is still a very young industry, even in this country where arboriculture is probably oldest globally. The arb association has taken on the mantle of professionalising and caring for the industry.

Do your teams come up against much opposition if you take a tree down from the general public?
Yes we do get that, especially when you are working for a local authority or in situations where a member of the community have an opinion on the tree even though they have no ownership of it. If you can provide a reasoned answer about why the tree needs to come down, 9 times out of 10 that suffices. It’s like anything really. You will have one person who is adamant that the trees can’t come down but the other person wants the tree down to let light into their home.

Is it strictly commercial work for you?
99% of our work is commercial. We do some domestic works but they are few and far between. We’d be lucky to do 10 or 15 domestic jobs a year. The rest of it is commercial. I think it’s something that needs to be done by the company. There is a need for the work to be done and you can only do that kind of commercial work when you are an established company. There are a lot of accreditations and health and safety hoops to be jumped through. We do a lot of work for one particular building company who do a lot of projects building schools so their health and safety requirements are out of this world.

So what do you think is the next big trend in arboriculture?
In the last 5 years I’ve seen a plethora of technology coming into the industry in terms of equipment a climber would use. The SRT (single rope technique) is also gaining a foothold in the UK which I’m not too convinced about myself! There are certain innovations that I’ve used in my career that when I started weren’t the usual at the time. On the surveying side of things, i think technology will become more and more prevalent. Everything will be surveyed on a GIS, using GPS positioning which is a no-brainer really.

What are the biggest challenges that you face?
Personally, it’s finding the time to do everything i need to do! I think recruitment is a difficult thing, staff retention is tough too. I think when you’re involved in running a department of 10 or 15 people, man management is a skill and it takes up a lot more time than i thought it would.

What do you like to do in your spare time?
I have a young family so i love spending time with my lad. We spend a lot of time together when we can. My hobbies are playing a bit of football and trying to maintain a level of fitness. I also like vintage motorbikes and I’m restoring a 42 year old Harley Davidson.