Thousands of infected larch trees to be felled 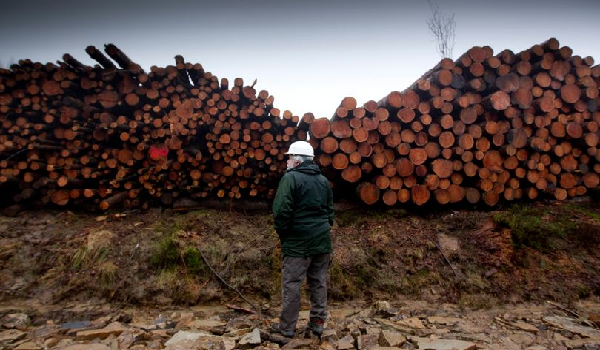 A road is to be built into a forest in Carmarthenshire and thousands of trees cut down. The larch trees, like many others in Wales, have fallen prey to a disease called Phytophthora ramorum which can cause fatal lesions on a tree’s trunk. Spores are also released which infect neighbouring trees.

And it now has planning permission, subject to conditions, from Carmarthenshire Council to build a road into the infected area.

An NRW spokesman said native broadleaf species will be replanted there afterwards. The felling work is due to start in late summer or early autumn. Goshawk nests were found away from the proposed felling area, but there was no evidence of red squirrels despite records of the animal living in the forest.

Hundreds of thousands of diseased larch trees were cut down around seven years ago in Afan Forest Park, Neath Port Talbot. The fungus-like Phytophthora ramorum was first found in the UK in a garden centre plant in 2002. It spread to shrubs such as rhododendrons, and then onto trees situated very close by.

Its evolution took a major turn in 2009 when Japanese larch and other conifers in south west England became infected. Russell Jones, land management officer at NRW, said: “Protecting and maintaining Wales’ forestry land is one of our biggest roles and tackling the spread of larch disease is a huge priority for us.

“Following talks with local communities, stakeholders and statutory bodies we intend to start felling around five and a half thousand infected trees at Pumsaint between the end of summer and early autumn.

“Native broadleaf species will be replanted in their place which can provide the woodland with more resilience as well as enrich the locally historic landscape.”