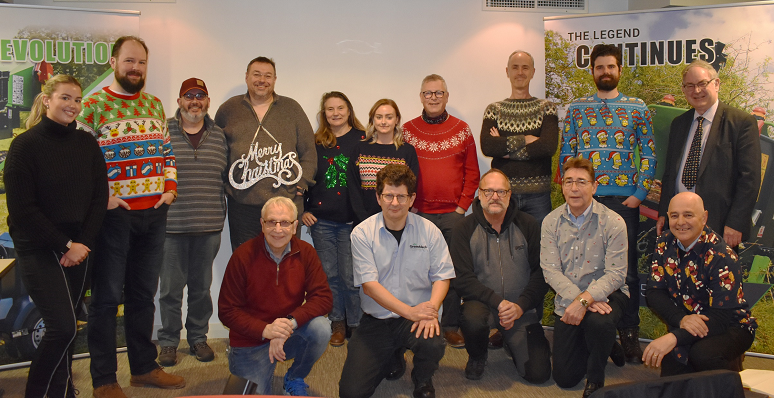 Europe’s leading woodchipper manufacturer, GreenMech, invited the industry media to join them for an update event with a festive feeling. The journalists discovered how GreenMech have overcome numerous challenges encountered since the last update event took place (five years ago). Everyone also had an opportunity to get hands-on with some of their latest innovations – including the EVO 205D and brand-new EVO 205D SURE-Trak.

In a presentation, sales director Martin Lucas outlined three major factors which have had an impact on business. The first, and perhaps biggest challenge, was the introduction of Stage V engine compliance. The need to fit new certified Stage V engines required the re-engineering of 20 GreenMech models in the region. This was a “massive task”, and he explained it required careful consideration to balance customer expectations, unit performance and cost.

While the transition period of Stage V was extended due to COVID-19, the wider impact and knock-on effects of the pandemic were also discussed. With their own dedicated manufacturing facility, Martin detailed how GreenMech endeavour to produce as much as they can themselves. However, GreenMech, like a lot of manufacturers, rely on the availability of third-party components such as hydraulics and electric components, – all of which were, and remain, in short supply. Therefore lead time management was another hurdle GreenMech had to battle, and their customers were faced with longer delivery times.

The third area discussed was Brexit. With exports accounting for roughly 70% of GreenMech’s business, the implications of the new European guidelines have added complexities, and, a big increase in the amount of paperwork GreenMech need to complete to get a machine to its final destination. However, focusing on the positives, Martin explained: “the appetite for UK manufactured product remains strong,” and, “there is a keenness from our European distribution partners to remain committed to the brand.”

Despite the adversity, the creativity of GreenMech shone through as Martin and members of the marketing team discussed the launch of the highly successful EVO series. With a new market image and approach, the EVO now accounts for a significant proportion of all orders placed.

First launched at the 2019 Arb Show, the EVO 165D set a new precedent for GreenMech. A tracked version, the EVO 165DT followed shortly after, and then came a 37hp petrol engine – which was introduced to bring the new EVO 165P into the sub-750kg category. Recently the ‘big brother’ came to market in the form of the EVO 205D – an 8” unit powered by a 50hp Kubota diesel engine.

The latest launch, the EVO 205D SAFE-Trak and SURE-Trak models, provides the operator with ultimate safety and stability when working across slopes of up to 35o. The media became some of the first to see the brand-new EVO 205D SURE-Trak, and this was lined-up, alongside other models from the EVO range, for a series of working demonstrations.

After getting hands-on, the press were then given an insight into how the machines are made with a step-by-step virtual factory tour. Jonathan Turner, GreenMech managing director, closed proceedings by saying: “We’re proud of our achievements and how we’ve overcome such a challenging couple of years, but now is the time to be even more positive and excited about our future. We will be continuing to work on industry-leading new products, designed to perform without compromise with the support of a great network of colleagues and dealers around us.”