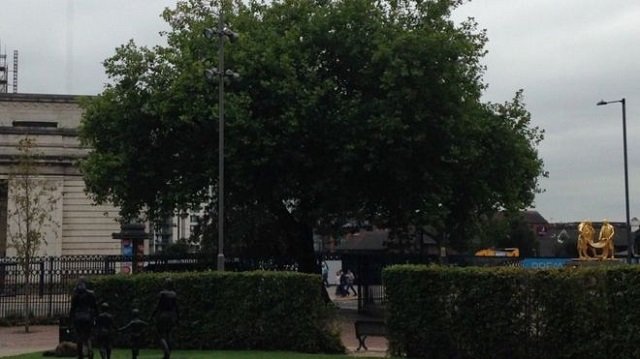 More than 1,000 people have backed a petition to save the last remaining tree of 99 commissioned by Joseph Chamberlain in Birmingham.

The London Plane, in Broad Street, thought to be the oldest tree in the city centre, could be felled to make way for the Midland Metro extension.

The council said it was looking to see what can be done to protect it.

“It (the tree) was planted when Chamberlain was mayor and was part of his plan that the city should be green with landscaped areas,” Mr Paine said.

Chamberlain, who became mayor in 1873, is credited with transforming Birmingham into one of the most advanced cities in the world.

Mr Paine added it was “extraordinary” the city centre’s oldest tree was “only 140 years old” and he had also been surprised to learn the other 98 trees which were part of Chamberlain’s scheme had gone.

Richard Cowell of Birmingham City Council, said it was acknowledged plans to extend the metro line to Centenary Square in 2017 could “have an impact on the health of the large plane tree in particular affecting the roots”.

A survey will be carried out to understand how close to the tree any engineering works could go, he said.

“This work will help any decision about how we manage the impact on this particular tree and will need to be balanced against wider economic and environmental benefits for the city,” he said.

The online petition is open until 31 December and will be presented to the council.