Hundred new trees planted ahead of Halesowen in Bloom event 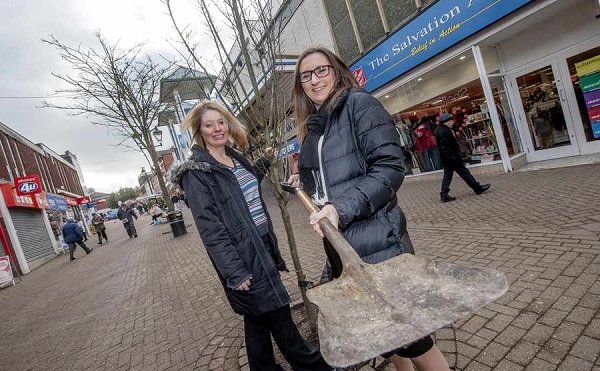 A town has turned over a new leaf with more than a hundred new trees planted as part of a community project.

The work has taken place during the winter months in preparation for this year’s Halesowen in Bloom event.

The final tree has now been placed in the town centre.

As part of the project, 100 trees have been planted at the town’s pocket park, in Rumbow.

Bluebell bulbs have also been planted in the area.

Five beech trees have been planted on the Earls traffic island as part of the project – with the work funded by engineering firm Sandvik.

The final two trees were placed in the town centre with the last planted only recently.

Officials today said a range of other activities were also planned to spruce up the town in time for the summer months – including litter picks.

And the town’s car parks have also received a fresh lick of paint.

Judging for the Halesowen in Bloom event will take place in the summer.

Town centre manager Eve O’Connor said the town had entered the competition for the first time and had achieved a silver-gilt award.

And she said they hoped to go one better this year by attaining the coveted gold award.

“Over recent months, a total of 107 new trees have been planted around the town and we are very pleased with the results,” she said.

“The 100 trees planted in the pocket park were provided free after we applied to the Woodland Trust.

“Sandvik provided the funding for the beech trees which have been planted on the traffic island.

“We were very proud to achieve the silver-gilt award last year and we are aiming to do even better this time.

“We are working very hard to get the gold award.”