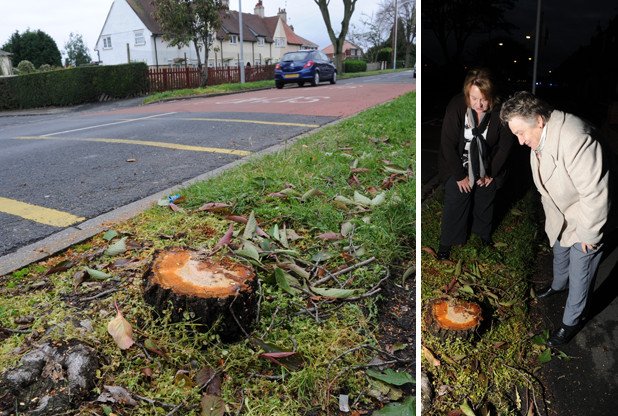 It seems Hull’s phantom tree chopper may have struck again.

Just days after a tree was mysteriously cut down in Newland Avenue, west Hull, in the middle of the night, another tree in Wolfreton Road, Anlaby, was targeted.

This time, the tree was chopped down at about midnight on Monday.

The Mail was contacted by residents living in Wolfreton Road to tell of the mystery, after yesterday’s story about the acacia tree in Newland Avenue, which was pulled down in the early hours of October 4.

One woman, who asked not to be named, said: “My husband plays darts on a Monday night and when he comes home he likes to watch Coronation Street.

“We were watching that when he said to me he thought the wind outside was causing problems with the satellite dish.

“Then we heard a funny noise, as if someone was cutting the grass.

“I got out of bed and saw the tree being cut down, I thought it was very strange at that time of night, but left it at that.”

The woman contacted East Riding Council the following day, and was told the authority was not responsible for cutting down the tree.

She said: “The next day, my husband spoke to our neighbours, who said they thought someone had cut down the tree because it was causing problems to telephone lines in the street.

“I contacted Kingston Communications and they said they had not had any reports of problems and were baffled by what has happened.”

The woman was then alerted to the tree mysteriously being cut down in Newland Avenue by a friend who had read the Mail’s story yesterday.

She said: “I’m not sure if the two are connected, it is a mystery why this has happened.”

East Riding Councillor Mary-Rose Hardy said she could not condone trees being cut down in this way.

She said: “Over the years, I have known some residents to take action into their own hands in other areas with regards to trees causing problems with their telephone lines.

“However, I have not had any reports of a problem in the Wolfreton Road area, but that doesn’t mean to say there aren’t any.

“I hope the matter is investigated properly.”

The Mail contacted East Riding Council regarding the cutting down of the tree, but no one was available for comment.

Meanwhile, a £100 reward has been made available by the Newland Residents’ Association in a bid to capture those responsible for cutting down the tree on October 4.

A spokesman for Newland Residents’ Association said: “It’s more confusing than anything else.

“We are very disappointed that someone has gone out of their way to remove a tree that was a benefit to traders and residents, as it really enhanced the look of the area.”