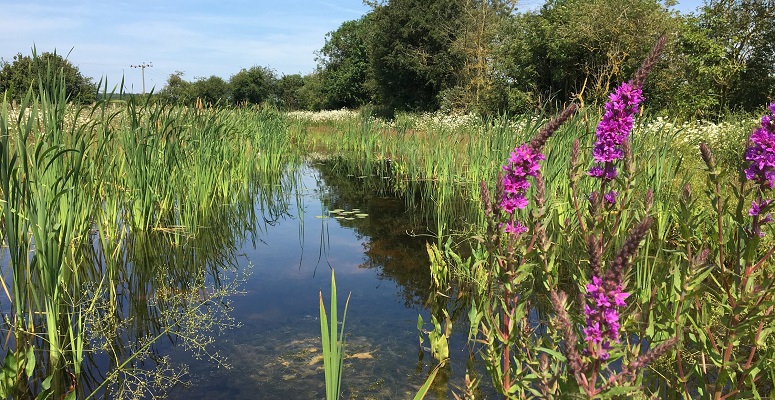 Around 250,000 trees will be planted in the West Midlands and Warwickshire by HS2’s enabling works contractor LMJV (Laing O’Rourke and J. Murphy & Sons Ltd) and their team of ecologists and landscape architects, with 80,000 already planted. In addition, 40 ponds and many acres of wetland, heathland and meadow in the region have been created. New wildlife habitats in a variety of locations include new badger setts, bat houses, bird boxes, reptile banks and bug houses to help local wildlife populations thrive.

The new woodlands will be part of HS2’s ‘green corridor’ which will see up to 7m new trees and shrubs planted between London and the West Midlands, and which will support delicately balanced local ecosystems running through the spine of the country.

HS2 is hosting a webinar on Wednesday 30 September for people to find out more about the habitats that have already been created in the region, and to learn about future plans. Speakers will include environmental experts from HS2, enabling works contractor LMJV (Laing O’Rourke and J. Murphy & Sons) and Five Rivers Environmental Contracting.

Attendees will hear about examples in the local area such as Finham Brook near Kenilworth in Warwickshire where there are six new ponds for great crested newts to breed in, extensive grassland and new habitats for reptiles. New woodland has been planted, with 6,200 new trees featuring species native to Warwickshire and grown in the UK from tree seeds sourced to be climate resilient such as silver birch, hazel, hawthorn and holly. The site is already contributing to supporting local wildlife, ranging from birds to great crested newts and is having a valuable and positive impact to the environment.

Near to the site in Solihull where the new HS2 Interchange station is being built, a new habitat at Biddles Loop is now full of new species-rich grassland, ponds with bulrushes, and native woodland planting right next to the existing Coleshill and Bannerly Pools Site of Specific Scientific Interest.

Close to Coleshill, new grassland and wetland habitats have been established and over 600 marshland plants unique to the area have been translocated, including common marsh bedstraw, marsh dock, ragged robin and bog stitchwort from a wetland area nearby.

In addition, a ‘training pond’ for otters has been created on land near Stoneleigh Park to ensure that pups can safely adopt anti-predator behaviour and learn foraging and hunting skills, before they take to the waters of the nearby River Avon. Artificial burrows and perches have also been created for kingfishers for a similar purpose, and a bat house provides a mix of roosting sites to attract different bat species identified by HS2 surveys. Ecologists predicted it would be two years before the building was occupied, but within weeks of it being installed, bats had already moved in.​

HS2’s Phase One Ecology Lead Kat Stanhope said: “Our aim is for HS2 to be the most sustainable railway in the world, and it will make a major contribution to helping Britain fight climate change and reach its net zero carbon targets by 2050. But even before HS2 starts operating, there are countless environmental projects and innovations occurring up and down the route to protect, preserve and enhance Britain’s precious natural environment.

“We have a clear vision for improving the natural environment in the areas around the new railway, such as Solihull and the wider region. We also recognise that every location is unique, so we’re making sure that our tailored landscape design and ecology work reflects the character of each unique location, and is designed to preserve local biodiversity.”

The environmental legacy of the railway is integral to the design principles for HS2, with Interchange station in Solihull a prime example of how the railway will be integrated into the landscape and create new areas for wildlife in an urban setting.

Solihull Metropolitan Borough Council approved the station design last month, saying that it: “draws upon the historic and agricultural character of the local area and delivers a strong sense of place and identity through its architectural form and the design of its landscape.”

This was testament to HS2’s design consultants ARUP, based in Birmingham, working closely with their landscape architects Churchman Thornhill Finch to develop a design which celebrates the local Warwickshire countryside and the native landscape associated with the Forest of Arden.

Chris Churchman, Director at Churchman Thornhill Finch said: “In our design, we wanted to capture the essence of the historic Warwickshire landscape of small fields, enclosed by hawthorn hedges punctuated by oak trees. It reconciles and humanises the large-scale Interchange station structure within the type of rural landscape expressed in paintings by the great British landscape painter John Constable.

“The design celebrates biodiversity through the use of signature native tree species supplemented by more unusual natives, notably crab apples, wild pear and plum. These are set within native hedges featuring a mix of blackthorn, hawthorn, hazel, dogwood, dog rose and elder.”

Steve Fancourt, HS2’s Landscape and Urban Design Manager said: “Through our broader landscape and ecology work, we have gathered vast amounts of information on local habitats and mapped landscape characteristics, overlain with data from National Forestry and Ancient Woodland inventories. This has enabled us to develop a planting strategy which reflects the changing palette of woodland types, hedgerows and wildlife habitats along the HS2 route combining plant species mixes that are both locally relevant and responsive to the changing geology, soils, seed zones and landscape character found alongside the railway.”

People can find out more about HS2’s webinar, ‘Ecology – habitats and wetlands in the West Midlands’, which will run from 12.30 to 13.30 on 30 September here: https://www.hs2.org.uk/events/hs2-in-focus-ecology-habitats-and-wetlands-in-the-west-midlands/

A full video recording of the session will be published online, so if people are not able to listen live they can still re-watch the session at their own leisure through a dedicated playlist on the HS2 YouTube channel.