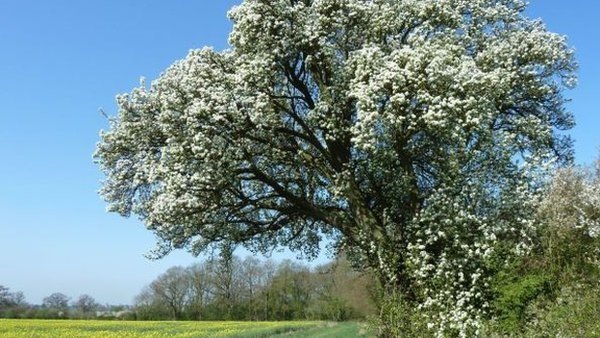 Plans to chop down an ancient pear tree to make way for the HS2 high-speed rail link are to be reviewed, the government has said.

The pear tree, near Cubbington, in Warwickshire, is one of the oldest in Britain, campaigners say.

Transport minister John Hayes said he would look into whether the 200-year-old tree could be replanted in another location.

However, experts said replanting the tree would be “prone to failure”.

The Ancient Tree Forum, a charity set up to promote conservation, said the replanting scheme was “fraught with problems”.

“In an ideal world it would be preserved, as would all ancient trees but unfortunately we don’t have that kind of protection in the UK.”

HS2 originally said it would collect DNA from the tree and replant the young trees in the surrounding area.

However, Mr Fay said he also doubted whether collecting DNA from the tree would prove effective.

“Taking a part of it and growing it on is a very reductionist view,” he said.

“Yes, there would be an identifiable gene record but it doesn’t replicate the time it has taken to create the ancient qualities of that tree as a habitat and as a natural feature.”

Cubbington Parish Council said it would prefer the proposed HS2 route to tunnel under the tree.

The Department for Transport said: “Options for the Cubbington pear tree will be revisited to see whether it can be replanted in another location, away from the proposed HS2 route.

“If this further study by HS2 Ltd shows it is still not possible to move the tree, cuttings will be taken and replanted in an effort to save the genetic material.”