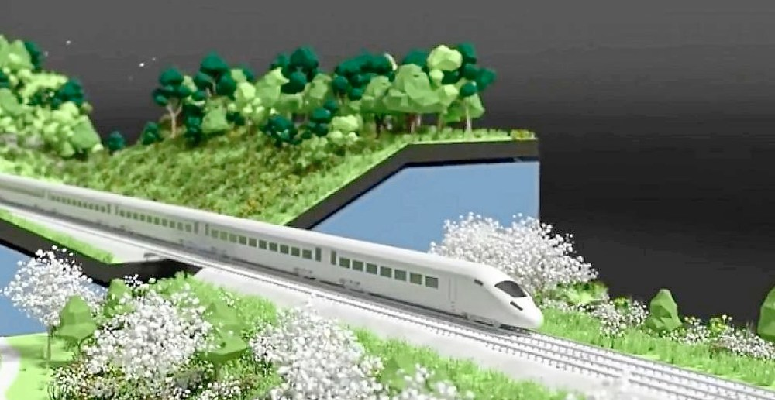 Ministers have put the cash forward as part of a woodland fund they say will enhance wildlife and see millions of new trees planted along the controversial line between Birmingham and Crewe, which is set to carve through around 45 miles of Staffordshire countryside to make way for HS2’s green corridor.

The Woodland Trust insists the scheme will not make up for the amount of ancient woodland set to be destroyed by HS2.

Ecologist Luci Ryan said: “This is utter greenwash nonsense from an organisation trying to pretend that HS2 isn’t the most environmentally destructive infrastructure project this country has seen in decades.

“Some 98 beautiful, rare, irreplaceable ancient woods will be destroyed or damaged by this scheme. That’s 98 habitats and ecosystems that support a whole host of mammals, birds, invertebrates, fungi and plants. And once that ancient woodland is gone, it’s gone forever so while planting new trees is all well and good, it’s no substitute for what will be lost.

“Their plans – which let’s not forget are a condition of the scheme, not being delivered out of the goodness of their hearts – fall woefully short of replacing what will be lost on something being touted as a green infrastructure project.”

Campaigners warn that 30 hectares of ancient woodland will be destroyed on phase 1 of HS2, from London-Birmingham, and 10.2 hectares will go as part of phase 2 through Staffordshire.

“This is like smashing a Ming vase and replacing it with bargain basement crockery,” Ms Ryan added.

The trust’s claims have been backed by Lichfield MP and HS2 opponent Michael Fabricant, who is a member of the trust. He said the ‘rare and ancient woodland’ that will be destroyed by HS2 ‘cannot be replaced by new growth’.

“It takes 400 years to develop the soil environment of ancient woodland and it is irreplaceable,” the Conservative MP added. “We should be in no doubt of that. Some of this includes damage in the Lichfield constituency and more throughout Staffordshire.”

HS2 Minister Nusrat Ghani said it was ‘imperative’ that the Government ‘set a new standard for protecting and enhancing our diverse woodlands and wildlife’.

“HS2’s green corridor is one of the most significant tree-planting and habitat creation projects ever undertaken in this country,” she added.

Oak, silver birch, wild cherry, hornbeam and holly are among the trees and shrubs set to be planted along the route. Ministers claim it will create more than 9 sq km of new woodlands, while also providing habitats for bats, badgers and great crested newts.

Councils along the line from Birmingham-Crewe will also be given part of a £6.5m fund for road improvements.