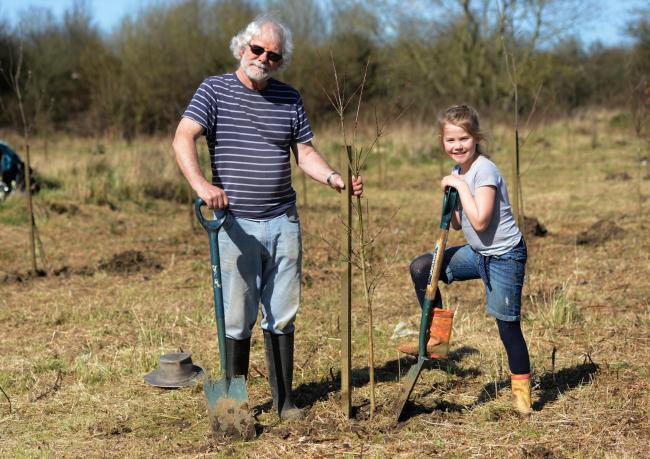 The Swindon Advertiser has reported that a community forest has finally flourished into life on Friday, 25 March, with the planting of 350 trees.

Green-fingered volunteers gathered at the former allotments at Pickards Small Field and Kembrey Grass to transform the popular green space into the Hreod Burna Urban Forest.

A team of 25 Nationwide employees picked up trowels to spend the morning completing the community forest.

A mixture oak, cherry and birch trees were placed into the ground after the group received a £12,000 grant from Tesco’s Bags of Help fund.

The mass planting was the result of a three year labour of love by campaigners to ensure the space was preserved after it was scouted by developers.

Developers Haboakus scrapped a £30m plan in 2012 to build 250 homes on the site after fierce opposition from residents, councillors and the Hreod Burna Parkway of Conservation Group.

Chairman of Hreod Burna Urban Forest Steve Thompson hoped the forest would provide a peaceful spot for generations to come.

He said: “It was amazing to see the space come to life and we finished the work in a good time. It is already a beautiful space and we hope that when the weather picks up we will see families enjoying the area.

“It’s been a long time in the making so to finally have trees in the ground and a stunning community space that people can enjoy is a great feeling.”

The team behind the urban forest worked tirelessly for months to spruce up the green space, which was cleared of high bramble bushes and mowed to ensure the best growing conditions for the forest.

Steve added: “We plan to hold events there in the future and we’re so proud of the amazing progress we have made. Our hard work has really paid off. We took on the developers and we won and it’s a great feeling to see the community forest finally here.”

Image courtesy of the Swindon Advertiser