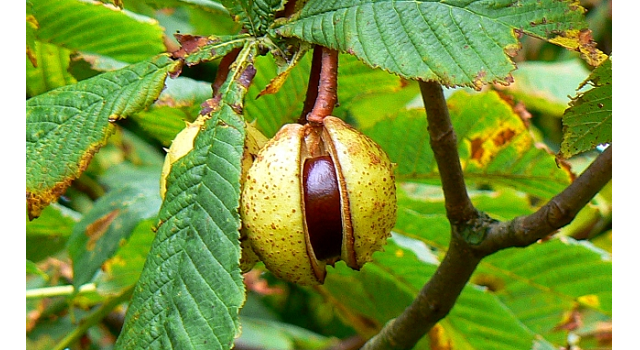 Perhaps due to the nation’s love of conker, the Horse Chestnut won the title of the UK’s favourite tree in a landslide victory.

Aesculus Hippocastanum, won more than 25 per cent of the vote in a poll run by the Royal Society of Biology (RSB), beating 14 other trees, including the Ash, Birch and Elder.

An organiser of the Annual World Conker Championship, in Northamptonshire, St John Burkett, believes the Horse Chestnut’s prized fruit has helped it to become the country’s best-loved tree.

“The Horse Chestnut is a beautiful looking tree and people associate it with the countryside, although it is found everywhere,” he said.

“People think back to their childhood and collecting conkers, which is magic – they are just absolutely beautiful things.”

The UK has an estimated 470,000 specimens of the tree, first introduced to our shores from Turkey in the late 16th century.

More than 2,500 people voted in the poll, held as part of the RSB’s Biology Week to promote interest in UK biology and environmental issues.

The Silver Birch came in second place with nearly 15 per cent of the vote, while the English Oak was third with about nine per cent.

Dr Laura Bellingan FRSB, the RSB’s director of policy and public affairs, said: “Trees are a valuable part of our culture and economy as well as the environment.

“They provide us with cleaner air, building materials, food and fuel, flood management; they are home to a wide range of wildlife, from insects to mammals; and they are beautiful.

“Urban trees can brighten up our cities, whilst many woodlands are beneficial and relaxing environments for thousands of visitors.”

About 230 competitors took part in this year’s World Conker Championships earlier this month, watched by more than 2,000 spectators.

The contest has been in the village of Ashton every year since 1965 and has so far raised more than £400,000 for charity.