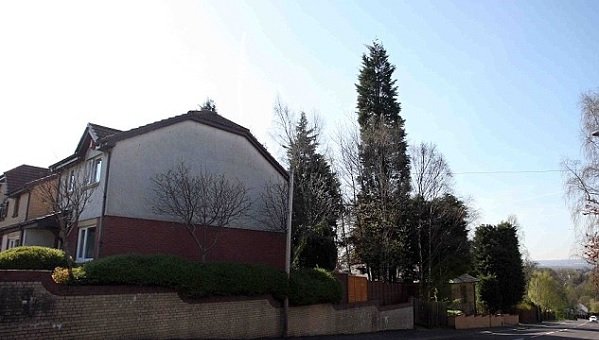 Long-suffering neighbours of Elizabeth Wilson have used new legislation to finally get the hedge chopped to just 13 feet.

They claimed parts of their gardens were left in deep shade due to the ‘eyesore,’ which they said was also a danger to their homes.

However, Mrs Wilson appealed the decision by the local authority to chop the trees to the Scottish Government, claiming they were necessary for her privacy.

Now government reporter John Martin has concluded that the four trees in her garden, which range from 33 to 49 feet, must come down to 13ft.

An adjacent 26 foot must also come down to 20ft as part of the ruling.

‘We applied for this in August last year but this problem has been going on since 2007, said neighbour Margaret Campbell, 70, of Uddingston, Lanarkshire.

‘She is saying that if she cuts the trees down we will be able to see right into her windows but that isn’t what we want to do.

‘It is partly about the lack of light we get because of them but it’s mainly to do with the safety aspect.

‘It is total devastation when they come down and we’ve had it in the past.

‘Our grandson used to sleep in the back bedroom and I dread to think what would have happened if a tree had come down and went through the house.

‘One tree that came down was 18 inches in diameter so it shows the size of them.

‘We don’t want arguments with neighbours all we have asked her is to come round and look at the trees but she never wants to.’

Her husband Ronald, 72, added: ‘When the trees get lopped we will have the sun in our garden all day, at the moment we lose all sunlight by 1pm and then have to put lights on in the house.

‘We have both worked all our days and didn’t want to get involved in something like this with neighbours but that’s what has happened.’

Mrs Wilson had used tree surgery over the years but this has not made much difference to the height, according to Mr Martin’s report.

She told the government reporter the trees give her privacy.

The High Hedge Act 2013 allows neighbours to complain to the council when a hedgerow blocks sunlight from reaching their garden.

Complainants and the hedge’s owner are encouraged to resolve the issue between themselves and councils should only be called in to help as a last resort.

Because the effect the hedge has is not always clear, disputes can last for years before an agreement can be reached.

The local authority can either issue a high hedge notice, which orders owners to cut the hedge back, or decide not to act.

The local authority cannot make any orders about the roots of the hedge.

Mr Martin said neighbours who complained about the trees would have been aware of them when they moved in, but added that cypress leylandii are ‘fast growing’ and ‘need to be kept in check if they are not to cause excessive overshadowing of adjoining property

He added: ‘While I have some sympathy with her position, she has the benefit of a large, attractive garden with mature trees and shrubs, many of which provide adequate screening to ensure her privacy and security, so I am not convinced that these matters alone provide a sound reason for allowing these trees to thrive to such a degree in close proximity to the new houses.’

Mr Martin said the council’s inital proposal to reduce the height of the trees to under 10 feet was ‘too severe’ as it would lead to the ‘regrettable’ loss of the Japanese cherry and reduce the other trees to ‘an untidy group of bare trunks which might never recover’.

Ruling the heights should be 20 feet for the Japanese cherry and 13 feet for the cypress, he concluded: ‘This will substantially improve the sunlight in the applicants’ garden while retaining the appellant’s privacy and security.’

The High Hedge (Scotland) Act, which came into force on April 1 last year, was designed to address disputes between neighbours.

Across the UK there have been thousands of rows between householders involving the fast growing leylandii.