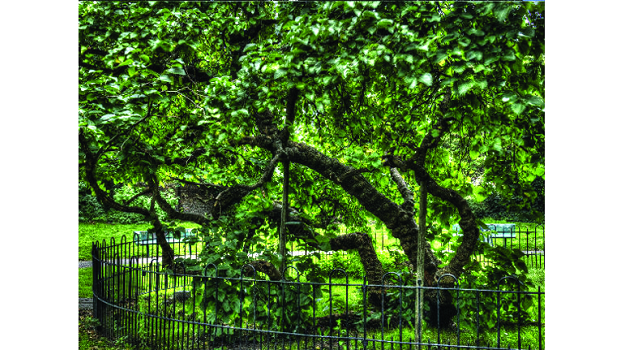 The Deptford Folk group says the mulberry tree, in the town’s Sayes Court Park, has survived for 400 years and deserves to win the award. However no one can say how a mulberry tree came to be in this small patch of green space.

Local folklore claims it was planted by Russian Tsar Peter the Great. In 1697 he travelled to England to learn about shipbuilding and navigation in order to establish the first Russian Navy.

Together with his entourage he moved to the Manor belonging to the writer and diarist John Evelyn at Sayes Court.

The 26-year old’s antics were not well received by landlord Evelyn, and Peter made the most of his time in Deptford, enjoying the local hostelries. One drunken escapade, which involved the Tsar being carted around in a wheelbarrow, led to the destruction of Evelyn’s prized holly bush.

To atone for this crime against his landlord’s garden, Peter the Great planted the mulberry tree. Another theory of the tree’s origin suggests it is a remnant of King James I’s attempt to foster a silk industry.

The king sent out hundreds of mulberry saplings to estate owners but the enterprise failed as he mistakenly brought in the black mulberry rather than the white variety preferred by silk worms.

A Deptford Folk spokesman said: “Evelyn’s mulberry deserves to be Tree of The Year for remarkably surviving for 400 years near one of the busiest working rivers in the world, through industrialisation and The Blitz. “It helps us imagine a time when gardens and fruit trees covered this patch of London.

John Evelyn’s garden was world renowned and he wrote books on trees, pollution, healthy eating and urban design: a man for our age. “The mulberry has stood steadfast for four centuries and now forms a central point in this leafy local park.

This tree is popular with locals at harvest time and many come away red handed, with a crop of mulberries, from this remarkably resilient tree.”