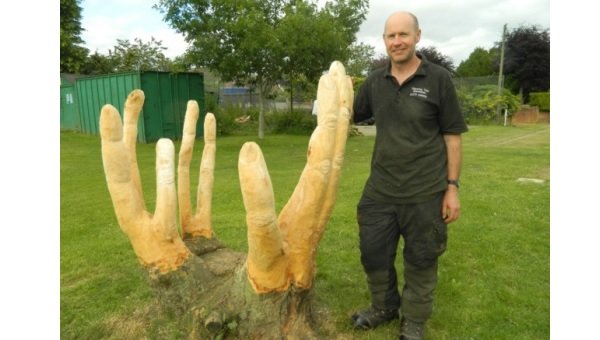 Tree sculptor Paul Kelly visited Harleston recreation ground to turn the London plane tree planted by the Queen Mother during a visit to the town on July 26, 1982 into a hand sculpture.

A health and safety inspection on behalf of the town council revealed side shoots from the base of the tree were weak, while damage had also occurred during the winter storms at the end of last year.

The consultant arborist conducting the assessment recommended removing the side shoots to try and strengthen the growth and make the tree safe or remove the tree altogether.

However, the town council was keen not to lose a tree of such historic importance and contacted the tree surgeons at Waveney Trees to see if they could help and the possibility of converting the tree into the sculpture was mooted.

Joan Garnham, part owner of Waveney Trees, said part of one of the tree limbs was taken away to be donated to Harleston museum.

She said visitors to the recreation ground were stopping to ask Mr Kelly what he was doing as he was going about his work, which involved removing some of the overhanging branches that were posing a risk to the public.

Mrs Garnham said the tree surgeons would also be sending a letter to the Queen explaining the work that had been done to the London plane, though she was not sure if she would get a reply.

She expected it to eventually grow back to how it was before, adding: “We are hoping so. That was the plan.

We did not want to chop the tree completely.

“We needed something in that space to say the tree’s still there and to make sure there aren’t too many boughs coming out of the base otherwise it will end up like it was before.”

The whole town turned out for the Queen Mother when she became the first Royal to visit Harleston for 900 years and was greeted by local dignitaries including the Lord Lieutenant of Norfolk Timothy Colman and then town council chairman Norman Farrar on her arrival.