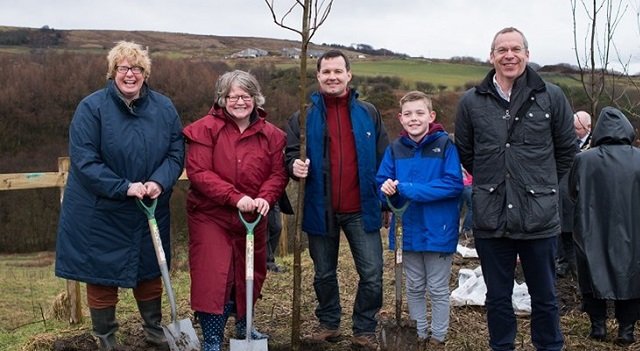 The ambition to create a Northern Forest spanning 120 miles took root yesterday on the hills above Bolton.

The first of 50 million trees to be planted over the next quarter of a century from Liverpool to Hull will be put in the ground by local community representatives, volunteers, funding bodies, government ministers and MPs.

This varied army of planters is an indication of the breadth of expertise, money, influence and enthusiasm needed to pull off landscape change on such a scale. Conceived by the Woodland Trust and the four Community Forest projects active across the area, Government provided £5.7m  to kick-start the £500m project in January.

Smithills, the Woodland Trust’s newly acquired urban fringe site near Bolton, is the site of the first planting. CEO Beccy Speight will welcome Thérèse Coffey, Parliamentary Under-Secretary of State for the Environment, Dan Jarvis MBE, MP for Barnsley Central, and Chris Green, MP for Bolton West, to join Bolton mayor, Roger Hayes and Harwich mayor, Stephen Rock in planting the first trees.  They’ll be helped by members of the eco-club of St Peters School and local volunteers and residents.

Woodland Trust CEO Beccy Speight said: “Today marks the planting of the first trees on our newly acquired Smithills site, which is open free to the public year round, as well as the first of the Northern Forest. It’s a fitting spot, a site in need of restoration, exhausted by its industrial past, but fiercely protected too. In 1896, more than 10,000 people took to the moors to demand their right to roam this incredibly beautiful place. That sums up how much people have long-valued their right to free green space.

“This is another iconic moment both for Smithills and the north of England. The Northern Forest is a groundbreaking project which is bold in its aim and never more needed! England in particular is losing trees, with planting rates stalling and woods lost. The North in particular needs to benefit from investment of this kind, with woodland cover woefully meagre at just 7.6%, well below the UK average of 13% and far below the EU average of 44%. And that’s significant, as investment in green spaces and trees in particular are shown to improve our health and wellbeing, create more prosperous communities and areas more resilient to the effects of climate change.”

The remainder of the week will see schools visit the site to take part in tree planting. On Saturday, the Trust is welcoming the general public to come along and do the same. To reserve a spade, visit its website.

The grassroots initiative will be driven by a partnership between the Woodland Trust and the four Community Forests, who hope to bring on board more funders, business and community support. There are four established Community Forests working across the proposed area for the Northern Forest including, City of Trees (Manchester), White Rose Forest (Leeds/Bradford), Mersey Forest (Liverpool), and HEYwoods (Hull and East Yorkshire).