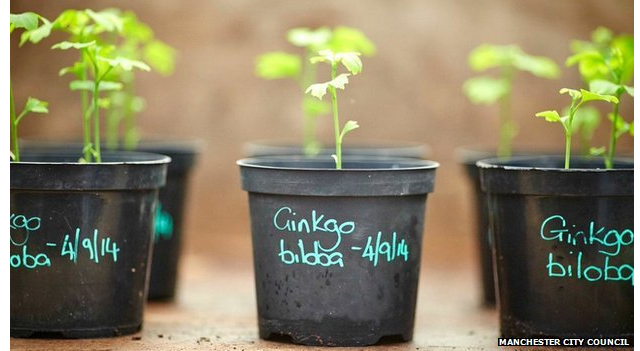 Seeds from trees which survived the World War Two bombing of Hiroshima have taken root in Manchester to celebrate its anniversary of becoming the UK’s first nuclear-free city.

Six ginkgo trees survived the atomic blast which killed about 100,000 people in the Japanese city on 6 August 1945.

Manchester was declared a nuclear-free zone on 5 November 1980.

It is the first UK city to be given seeds, which it received in recognition of its global anti-nuclear role.

Manchester is a vice president city of Mayors for Peace, a global programme founded by the mayor of Hiroshima, Takeshi Araki, in 1982.

The six ginkgo trees, which still grow about a mile (1.6km) from the bomb site, suffered extreme damage in the blast.

However, new buds soon emerged from the burnt trunks, leading to the ginkgo becoming a symbol of hope in Japan.

The Lord Mayor of Manchester Sue Cooley said the seedlings’ history made them “truly breathtaking”.

“They serve as a pertinent symbol of hope and a reminder that we stand proud, with our fellow Mayors for Peace cities, in the call for nuclear disarmament.”

The seedlings have been grown at Hulme Community Garden Centre. A decision on where they will be planted is still to be made.