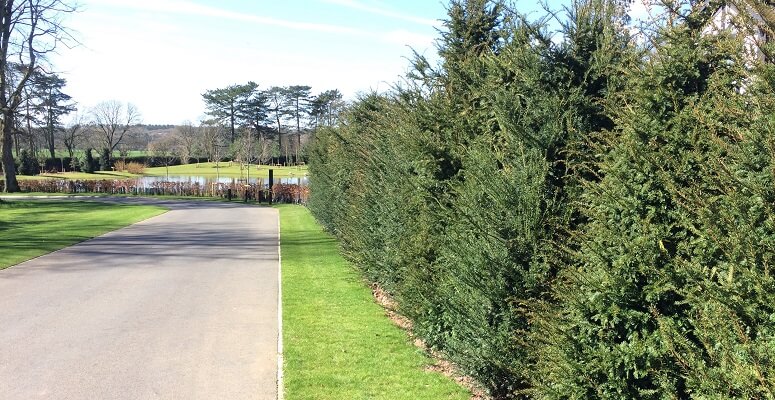 Hillier Trees has recently completed a project to supply a number of semi-mature trees and mature hedging plants to Holly Bush Farm in Staffordshire.

“Midland Contractors, were responsible for all hard and soft landscaping. All of which was designed to be of the absolute highest standard across the large estate,” comments Jamie Gormley, Account Manager at Hillier Trees.

“When commencing the soft landscaping elements, we were contacted by them to support. Alongside the quality requirements, it was also an important specification of the project that the finished result looked as though it had been in-situ for many years”.

“At Hillier, we love getting involved in the early stages of projects and working alongside our customers to help ensure we achieve the best possible results,” says Jamie. “Trees are the backbone of almost all landscape schemes and so it is really important we work together to get this element right.”

One of the key elements of the estate renovation was the creation of a large, impressive, swan lake at the entrance to the property. Some semi-mature evergreen trees were requested in order to create tall canopy boundaries. Hillier visited the property to make recommendations for further tree species which would establish well within the site-specific conditions and offer visual appeal.

Large quantities of semi-mature trees were supplied over a series of deliveries. All of which were British-grown by Hillier Trees on the company’s Hampshire tree nurseries. These included more than 50 semi-mature native pines for large evergreen boundaries to the properties.

Also planted were a number of Betula nigra multi-stem trees. Chosen for their ability to establish close to water and the stunning visual appeal of their peeling bark. To offer contrast to the green of the pines, a Hillier cultivar, Betula utilis ‘Jermyns’, was recommended. This tree has striking, pure-white bark that is known to shine in the moonlight.

The high quality of the trees rooting system was essential to ensure successful establishment. All of the trees had been four times transplanted during their growth. Also, giving fully fibrous root systems to help ensure they had minimal chance of failing.

While assisting Midland Contractors, Hillier Trees also highlighted the instant mature hedging it grows. A supply of 40 fully-formed 3.5m yew hedges, which had been grown in airpots for 18 months, were planted to attractively surround the existing stately home and garden.

“Hillier Trees provided tree recommendations which would not only be visually rewarding for the client, but establish well within the site conditions,” comments Alex Veitch of Midland Contractors. “The semi-mature trees and instant hedging were all of the highest quality and delivered punctually.”