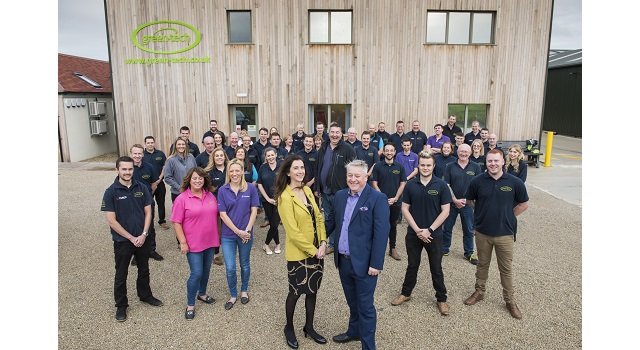 Green-tech is celebrating its most successful month of sales in its 22 year trading history.

This comes as the company also celebrates its 1 year anniversary in their new purpose-built business park which has enabled them to increase their sales and administration support and vastly increase their warehousing and distribution facilities.

Earlier this year Green-tech predicted this tree planting season to be their busiest but November’s sales figures have far exceeded their expectations.

Head of Sales Richard Gill said: “November was a storming month and the good news is that it looks set to continue.  We hold the largest stocks of tree shelters and stakes in the UK; our current stockholding is 2 million tree shelters. We can generally offer next day delivery and this coupled with our competitive pricing and sales expertise is a winner with our customers.”

This news rounds off a successful year for Green-tech despite the continued tough trading conditions. Green-tech is well known for its commitment to the landscaping industry and is an avid supporter and contributor. During 2016 the Head of Sales Richard Gill was voted in as the Chairman of the BALI North East and Yorkshire region and Chairman Richard Kay was invited to join the main BALI board where he has taken up the position of Director responsible for Affiliates. Richard Kay and Managing Director Rachel Kay have also joined forces with the RHS and are mentors for The Green Plan It Challenge; a 10 week project that will see  secondary school students re-thinking the role of green space for community benefit.

Green-tech was also the headline sponsor for the second year of the BALI National Landscape Awards which took place last week and they themselves were winners in 2 award categories – Employer of Year and Affiliate Exceptional Service.

Earlier this year the company restructured its sales team and promoted internally. Headcount now exceeds 60 employees but this is set to rise during 2017 as Green-tech continues in its drive to double its turnover by 2020.

Chairman Richard Kay concludes: “I am thrilled at our present position. Trading conditions and the market continue to be tough but overall it has been a great year for Green-tech.  A record month is always something to celebrate. I am delighted that our hard work has paid off.  We are already looking forward to smashing this month’s figure so watch this space!”