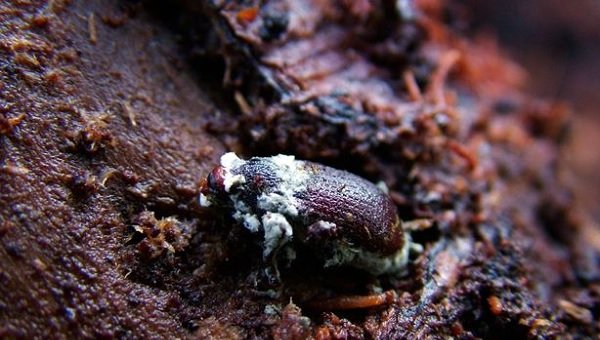 Forests in Wales have become biological battlefields in which tiny killers are waging hi-tech war on invading forces.

Just as military drones can exact targeted mayhem in modern conflicts, so too are the weapons of biological warfare being harnessed by Welsh scientists.

Insect killers such as predatory beetles and nematode worms are being sent into battle against foreign bugs that threaten mass destruction in Welsh forests, from the great spruce bark beetle to the large pine weevil.

Operational support for these microscopic troops is also being deployed, with sophisticated computer models now helping tree specialists predict where new outbreaks could start – and when counter measures should be launched.

“After a series of field observations we now know that current controls are working, even in the furthest corners of Wales, from Pembrokeshire to the Lleyn peninsula,” said Tim Saunders, manager of the EU-funded IMPACT project.

This joint Ireland-Wales project, set up to examine tree pests, has been given added impetus by the emergence of new threats driven by a combination of climate change and the global trade in timber products.

In recent years huge swathes of forestry in Wales have been levelled to counter the spread of new and increasingly damaging organisms such as ramorum, the larch killer.

But the five-year IMPACT project, which ends in June, believes its Integrated Pest Management systems could provide part of the solution.

This has been deployed against the great spruce bark beetle, an exotic pest from mainland Europe which poses one of the biggest threats to commercial forestry.

Rhizophagus has an extraordinary ability to locate its prey, even when only a few trees in a forest are invested. Foresters have been releasing the tiny killer whenever they find the pests.

“Without it, many commercial spruce forests across the country would have been badly affected, killing thousands of trees and reducing returns for the forestry sector,” said Mr Saunders.

Meanwhile, the use of nematodes coupled with fungi is helping to combat another beetle, the large pine weevil, potentially the most damaging and costly pest in UK forests.

These microscopic nematode worms attack and kill the weevils as larvae, pupae and young adults.

Weevil population in Welsh forests have been cut by up to 90% where they have been applied.

“We have shown that we can use a lower concentration of the nematode and fungal agents in treating threatened areas,” said Prof Tariq Butt of Swansea University.

“This has an important impact financially, reducing expenditure by up to 20%.”