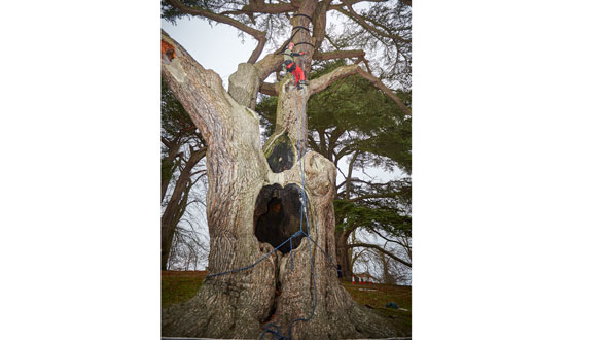 An arboriculturalist from Shiplake worked his magic to save an historic tree that featured in a Harry Potter film.

Hugo Loudon, of Heritage Tree Services in Henley, was called in by Blenheim Palace in Woodstock amid fears that the 350 year old cedar of Lebanon was at the end of its life and would have to be chopped down to prevent it falling on visitors.

The 65ft tall tree has a gaping hole in the middle of its huge hollow trunk and has been damaged by the weather over the years.

Mr Loudon designed and installed a bespoke brace that prevents it from collapsing.

He said: “Blenheim Palace were faced with a dilemma as one of their most important veteran trees was physiologically and structurally condemned.

“Their consultants said there was no way it could continue and it had to go. The palace has a duty of care to members of the public visiting the tree. Physiologically, it is very elderly, going through its typical late-life cycle, and structurally it was in a very, very poor condition. I was called in at the 11th hour to see if there was something that I could do.

“It was a challenge to find something that would be structurally acceptable. After many calculations and a huge amount of desktop work, we designed a special bracing system we had made up by a firm in Germany. The system has five braces, both dynamic and static.” The work involved a team of tree surgeons using climbers and a cherry picker to fix cables to the tree’s larger upper branches and attaching them to other trees nearby.

Mr Loudon, 50, said he expected the system to extend the life of the tree by eight or nine years and it could even be extended.

The tree appeared in the fifth Harry Potter film, The Order of the Phoenix, where Severus Snape, the potions master played by the late Alan Rickman, endures a flashback to being bullied by Potter’s father James, who cast a spell that dangled him upside down from the top of the tree.

The tree’s appearance in the 2007 movie made it a favourite with fans of the film franchise, who travel from all over the world to see it in the grounds of the palace, which was the birthplace of Sir Winston Churchill.

Meanwhile, Mr Loudon has also been helping Henley Town Council with its trees.

He said: “It is very important with the pollution issues in Henley. One of my jobs is to educate on how to manage trees successfully and harmoniously as it is important to the development of the environment in the 21st century.”

Blenheim’s trees would have been planted during Lancelot “Capability” Brown’s creation of the house’s parkland.