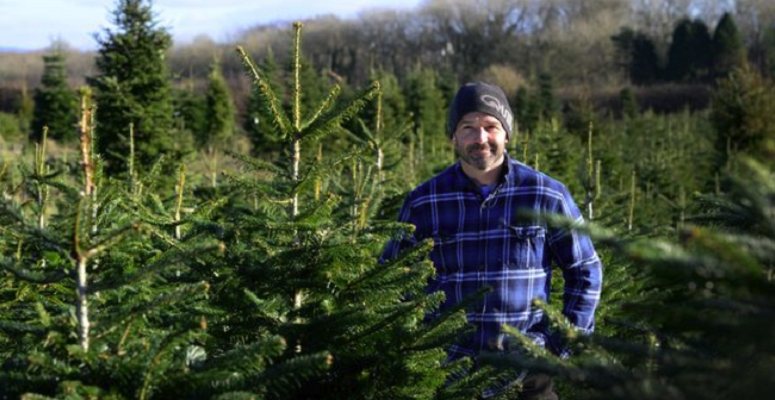 Weeks of dry weather and scorching temperatures in Wales have ruined around 10,000 Christmas trees belonging to a Welsh tree farmer.

Rob Morgan, owner of Gower Fresh Christmas Trees, invests a huge amount of time and effort into the firm.

He plants around 30,000 new trees every year, with the seeds being imported from Canada before going to a plant nursery for four years. The plant then goes into the ground for eight years – meaning from seed to sale, it takes around 12 years to get the finished product.

The farm is one of the largest Christmas tree growers in Wales, selling 15,000 a year.

Mr Morgan is the fifth generation of his family to farm the land. When he took over the farm, as it was then, he had the idea to plant Christmas trees. But he estimates he has already lost a third of the 30,000 new trees due to the summer heatwave that has gripped Wales in recent weeks meaning both trees and animals on the farm have struggled to cope.

“The new tender bean shoot growths just get burnt off in the fierce heat of the sun,” he said. “They are just burning off before they get a chance. It’s a major financial blow.”

Older trees on the farm have deeper roots and are able to withstand drier conditions, but – for Rob – the damage has already been done.

“I will have to double my production and planting next year and will have to take the hit. The herd of 34 have been enjoying “five-star treatment,” thanks to a huge fan being brought in to keep them cool.