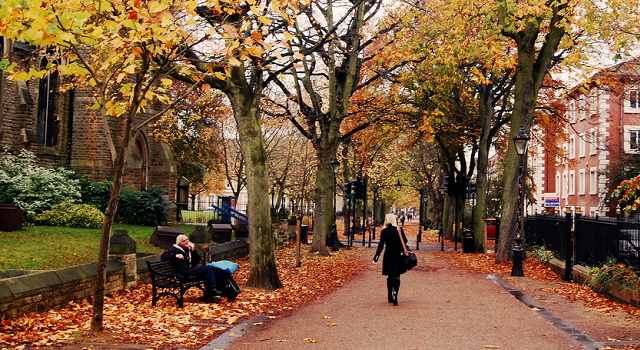 People living in polluted urban areas are far less likely to be admitted to hospital with asthma when there are lots of trees in their neighbourhood, a study by the University of Exeter’s medical school has found.

The study into the impact of urban greenery on asthma suggests that respiratory health can be improved by the expansion of tree cover in very polluted urban neighbourhoods.

The study, published in the journal Environment International, looked at more than 650,000 serious asthma attacks over a 15 year period. Emergency hospitalisations were compared across 26,000 urban neighbourhoods in England.

In the most polluted urban areas, trees had a particularly strong association with fewer emergency asthma cases. In relatively unpolluted urban neighbourhoods trees did not have the same impact.

In a typical urban area with a high level of background air pollution – for example, around 15 micrograms of fine particulate matter (PM2.5) per cubic metre, or a nitrogen dioxide concentration around 33 micrograms per cubic metre – an extra 300 trees per square kilometre was associated with around 50 fewer emergency asthma cases per 100,000 residents over the 15 year study period.

The findings could have important implications for planning and public health policy, and suggest that tree planting could play a role in reducing the effects of air pollution from cars.

Over 5.4 million people receive treatment for asthma in the UK with an annual cost to the NHS of around £1 billion. 18 per cent of adults report asthma in the previous 12 months, and a quarter of 13-14 year olds report symptoms. Asthma causes over a thousand deaths a year.

The study led by Dr Ian Alcock, research fellow at the University of Exeter’s Medical School, found that trees and green space were both related to a decrease in people admitted to hospital with asthma.

“We wanted to clarify how urban vegetation may be related to respiratory health. We know that trees remove the air pollutants which can bring on asthma attacks, but in some situations they can also cause localised build-ups of particulates by preventing their dispersion by wind. And vegetation can also produce allergenic pollen which exacerbates asthma.

We found that on balance, urban vegetation appears to do significantly more good than harm. However, effects were not equal everywhere. Greenspace and gardens were associated with reductions in asthma hospitalisation at lower pollutant levels, but not in the most polluted urban areas. With trees it was the other way round. It may be that grass pollens become more allergenic when combined with air pollutants so that the benefits of greenspace diminish as pollution increases. In contrast, trees can effectively remove pollutants from the air, and this may explain why they appear to be most beneficial where concentrations are high.”

Co-author Dr Rachel McInnes, Senior Climate Impacts Scientist at the Met Office, added: “This finding that the effects of different types of vegetation – green space and gardens, and tree cover – differ at both very high and very low air pollution levels is particularly relevant for public health and urban planning policies. We also know that the interaction between pollen and air pollution, and the effect on health and asthma is highly complex and this study confirms that more research is required in this area. Large collaborative research projects, like this from the NIHR Health Protection Research Unit in Environmental Change and Health are a very effective way to carry out this type of cross-disciplinary work.”