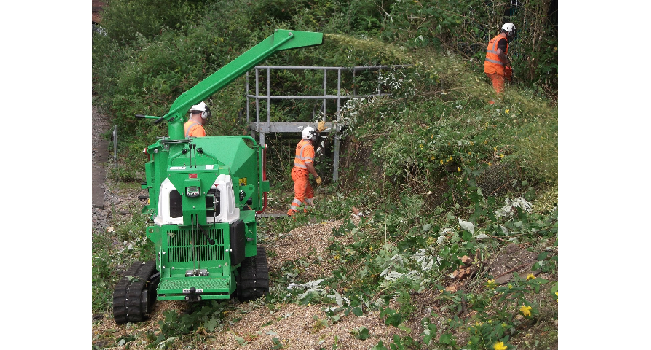 For the reduction of woody waste on difficult to get to locations and steep embankments, the award-winning SAFE-Trak models from GreenMech stand out alone. They are the first products of their kind to be both tracked and narrow and were the qualities that have led Yvonne Hayes, Managing Director of Hampshire based Hayes Forestry, to purchase not just one SAFE-Trak 19-28, but four!

Hayes Forestry has over 40 years of experience in the industry.  Starting out from log and fencing work, the company progressed into timber projects before the removal of railway vegetation became their predominant activity in 2008/9.  “Approximately 85% of our business is now railway work and this is ever-increasing due to the increased expenditure of Network Rail,” says Yvonne.  “With railway projects, all machinery needs to be able to cope with the steep embankments.  This makes the patented system GreenMech have on their SAFE-Trak’s the best – my staff wouldn’t use anything else! They are reliable and relentlessly tackle all tasks.”

The GreenMech SAFE-Trak system incorporates two independently adjusted track mounted legs.  By extending one track at a time embankments up to 35° can be traversed in complete safety. With both track mounts fully extended a massive ground clearance of 600mm can be achieved for clearance of hidden obstacles making it the ideal choice for jobs on the most difficult terrain. The SAFE-Trak 19-28 is a powerful workhorse fitted with a 50hp diesel engine. It has a 190mm x 280mm letterbox-style infeed throat which provides a 190mm chipping capacity and comes fitted as standard with GreenMechs’ patented Disc-Blade chipping technology and ‘no stress’ electronic control system.

Hayes have been using GreenMech chippers for around the last 7 years. Alongside their four SAFE-Trak 19-28’s they also have in their portfolio two GreenMech QuadChip 160’s which they use on land-based projects and smaller environmental jobs. Because a percentage of their work is done during the night their most recent SAFE-Trak came fitted with a lighting tower.  “Having lights on the machine will prove to be a massive asset” adds Yvonne, “providing additional lighting to the head torches and standing lights we would usually have on site is a significant improvement.”