GreenMech host the Press for a day of talks and demonstrations 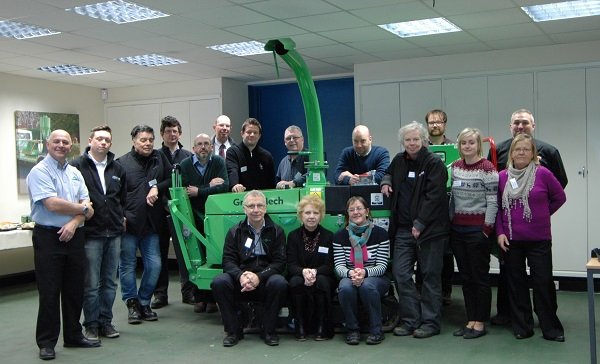 GreenMech, supported by dealers Orange Plant, recently opened up their Alcester factory for a press visit and played host to a wide array of the media.  The assembled mass were treated to presentations from both companies; a factory tour and then demonstrations of some of their most popular equipment.  Managing Director of GreenMech, Jonathan Turner, welcomed the press saying the company has a “cradle to grave approach to chippers”.

GreenMech’s site, The Mill Industrial Park, has been a home to manufacturing for over 50 years. GreenMech’s Chairman, Tony Turner (Jonathans’ father), founded Turner Engineering in 1963 and originally producing Hydramowers and Flail Mowers.  In 1978, driven by design, development and engineering, the company became Turner International Ltd., and then in 1993 GreenMech as Tony could see the potential in chippers.

Starting proceedings Martin Lucas, Sales Director, explained why chippers are ever-increasing in popularity; a combination of increasingly stringent burning regulations, the cost of landfill as well as providing an ethical method of disposal. A chipper typically provides a 6:1 breakdown ratio meaning woody waste that would normally require 6 loads to transport and dispose can be taken in 1. The ever-expanding market spans a wide range of customers from Arboretums and Golf Courses to Railway Contractors and Zoos. Martin went on to summarise the GreenMech portfolio and explained that it is thanks to certain features, such as reduced noise levels, letterbox opening for faster throughput and vertical feed rollers that the GreenMech machines stand out from the crowd. GreenMech are committed to the dealer route to market and are represented by 16 dealers within the UK, with international trade occurring in 30 countries.

For Orange Plant, General Manager Keith Hutchinson introduced Exports Manager John Mason who explained how the company were established in 2001 and now they are a main dealer for GreenMech, Carlton Stump Grinders, Green Teeth and Hakki Pilke Firewood Processors.  Whilst GreenMech only came on board at the end of 2013 they have carried the Carlton range since 2007.  Today they have grown to 7 depots nationwide and have a hire fleet of wood chippers and stump grinders believed to be one of the largest in the UK at 140 units.

John highlighted the benefits of using a stump grinder as opposed to digging out, burning or poisoning a stump. Orange Plant had to overcome a number of challenges when introducing Carlton to the UK, mostly due to the difference in opinions and regulations from the American market.  Americans see big, heavy and powerful as best whereas a different viewpoint to emissions, manoeuvrability and manpower in the UK means something small but capable is preferred. There are also vast differences between American and European regulations meaning Orange Plant had to enforce some changes to the machines and update the paperwork to ensure all models complied with EU and CE legislation. Carlton’s are well respected in the market, known for their robust and reliable build quality; efficient razor cutting system and simple belt drive meaning all horsepower from the engine is transferred to the cutting wheel.

Presentations over, next was the factory tour to give everyone the opportunity to witness the complete manufacturing process from initial design to end product.  The ensemble was able to travel alongside the sheet metal from when it arrives to being transformation into quality wood chippers.  Proud to be quality British manufacturers, GreenMech have continued to invest in state of the art equipment specifically in the areas of steel cutting, folding, shot blasting and powder coating systems.  In-house manufacturing of the majority of the machines allows the company to be in control of both quality and cost.

Then it was outside to see product demonstrations, the first of which was the Carlton SP7015TRX stump grinder.  This model is one of the largest of its kind available in the UK and is a ‘go anywhere do anything’ machine that makes light work of any size stump. It provides big cutting power from a massive 1780mm cutting arc and offers and impressive 1060mm cutting height above ground and 340mm below. The power from the 66HP turbo diesel engine was evident as it made short work of the stump. Following this was the SP5014TRX, a compact, powerful and reliable stump grinder with a 1090mm cutting arc providing a 355mm cutting depth below ground.  Both machines are radio remote controlled to increase operator visibility, usability and safety.

Following were two GreenMech machines – the small and compact CS100 and the QuadTrak 160 which came complete with a dedicated trailer allowing it to also operate as a towed machine. Designed with the professional Landscaper, Arborist or Parks Manager in mind the CS 100 is a powerful workhorse that combines versatility with economy.  At only 760mm wide it easily gets through restricted access or into tight spaces making it perfect for ‘on-the-spot’ chipping and the ideal chipper for big jobs in small spaces. The wide, open in-feed chute enables solid timber of up to 100mm, or large volumes of bushy material, to be processed with minimal shedding/reducing.  At the other end of the scale is the QuadChip 160, witha full 360̊turntable and tilt action to provide convenient and safe loading at the kerb-side or in restricted areas. It offers a 160mm chipping capacity and comes fitted as standard with GreenMech’s no-stress feed system and patented disc blade chipping technology.

Demonstrations over, it was back inside for a short question and answer session and concluding comments and thanks from both the GreenMech and Orange Plant teams. The event was hailed a great success by all.