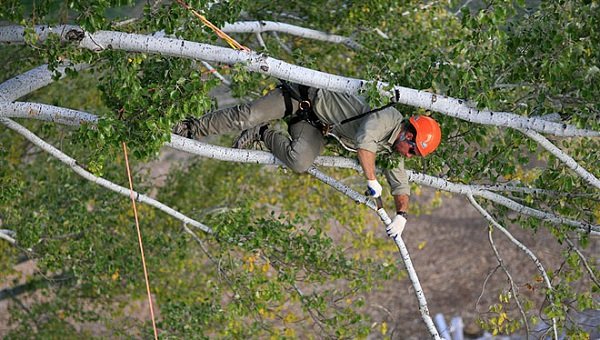 As job descriptions go, the arborist’s is pretty badass: climb trees all day with a chainsaw, handsaws, and other sharp objects on your belt. Lash your riggings onto elements that can bend or break. Oh, and be careful not to cut your own rope.

These beautiful glimpses into the life of professional tree climbers were shot by John Evans, a photographer, climber, and, perhaps not coincidentally, marketing director of Petzl, which makes climbing and lighting gear. John and I did a canyoneering trip into the San Rafael Swell five or six years ago, and, as accomplished as he is as a rock and ice climber and canyoneer, he’s just as passionate about photography. His website, John Evans Photography, is a great place to see the outlet for that passion.

About this shoot, John said:

“Shooting professional arborists has been really interesting: First, it’s unbelievable to see how easily and quickly they move through the canopy; they’re literally flying from branch-to-branch like some scene out of Avatar. It’s also a subject that’s not covered a lot, so it was rewarding to be able to bring a fresh photographic approach to the subject matter.

“In terms of challenges, this type of photography is a lot like shooting climbing, where you deal with positioning and rigging at height and trying to capture the action in a way that relates the subject to the vertical environment in an aesthetic way. There were definitely some new challenges, too, chief among them the three-dimensional plane the arborist move through. In rock climbing, you’re more limited in the paths you travel, but because the canopy is three dimensional, finding and then getting into the right shooting spot was a lot tougher (but more interesting). And framing is also a big issue: A shot is easily ruined by distracting elements, like branches.”