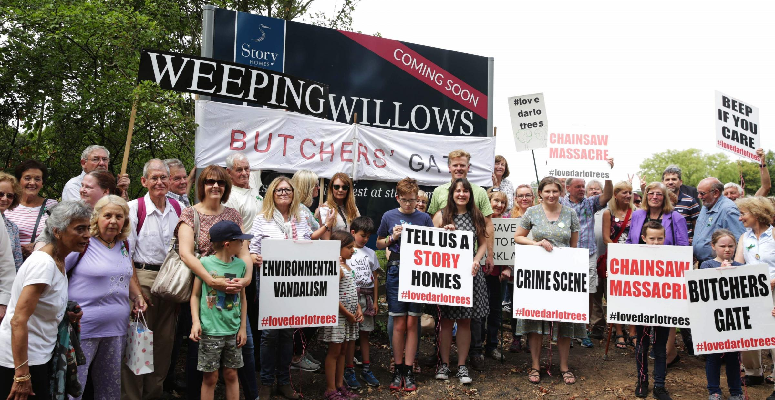 Dozens of protesters joined the Green Party’s deputy leader near a controversial housing development which has seen hundreds of trees felled.

Amelia Womack said she was visiting the town after learning of the grassroots protest movement, supported by her local party members, after the trees were cut down on the former Blackwell Grange Golf Course site in Darlington to make way for executive homes.

She met local residents, took a tour of the historic parkland opposite, which could also be developed, and saw first-hand the Willows building site – which has now been dubbed ‘Weeping Willows’ by campaigners, to show their distaste at the amount of trees felled.

Darlington Borough Council claims many of the trees cut down were diseased, and all were felled legally, but campaigners take issue with this.

Dozens of protesters turned out in the midday heat yesterday and were supported by passing motorists who sounded their horns in support.

Ms Womack said: “I have met the people in the community today and it is clear their voices have been ignored and their concerns have been ignored. People are saying they may never have protested before but they have got angry enough to do something about it on this occasion. They want to preserve these trees for future generations.”

She said the Green Party is planning on fielding candidates in every council ward in the 2019 local government elections – and hopes the strength of feeling is enough to elect a Green councillor.

Local Green Party activist Matthew Snedker added: “We actually got the third highest proportion of votes last time in Darlington but with the first past the post system we did not have any councillors.

“At least if there had been a Green councillor involved in this process we might have seen major concerns raised earlier, before it was too late and the trees were cut down.”

He said the ‘shock and distress’ felt by residents and visitors when the trees were felled is still raw.

“I know that Amelia has been following what has been going on in the town to protect our trees and I am delighted that she has made the time to see first hand the work we have been doing,” he added.

Story Homes finally got planning permission after a three-year planning battle and earlier this year cleared the former golf course of about 180 trees.

Ms Womack met protesters at the Blackwell Grange Hotel and took part in a protest walk through the historic parkland around the hotel, before crossing the road to the Willows site, where a banner was unfurled in front of the developer’s sign to spell out ‘Weeping Willows’.