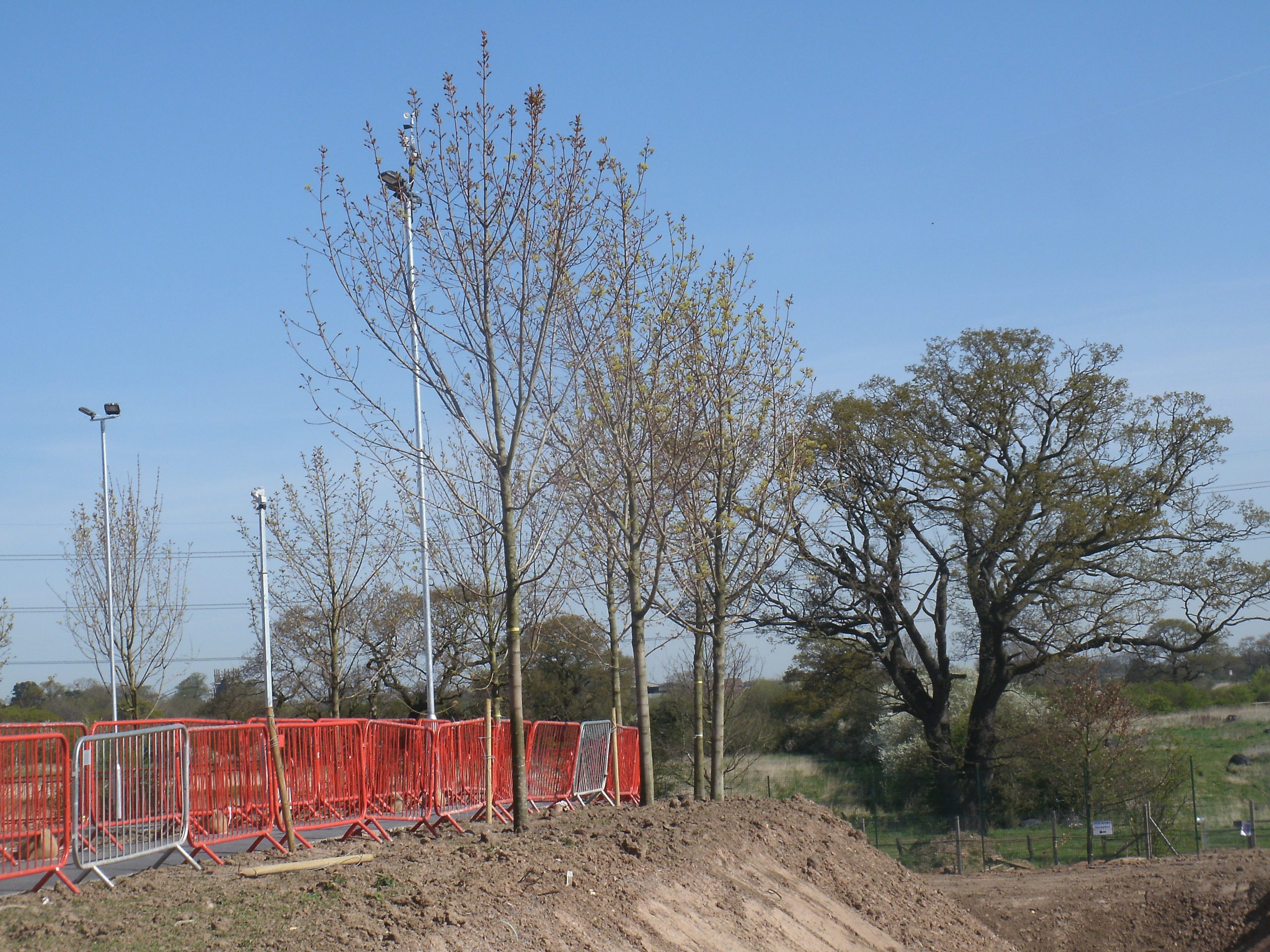 Grace Landscapes have been making Energy from Waste sites across the country a more pleasant place to work since Autumn 2013 with Clugston Construction serving as the main contractor.

First to be completed was Lincoln EfW followed by Staffordshire then Ardley -Oxford and Battlefield – Shrewsbury is still on going.

At Lincoln a screen of semi mature trees and conifers were planted along the boundary with the installation of bird, bat boxes and feeding stations to encourage wildlife. The areas surrounding the building and the visitors centre were planted with extra heavy standard trees and ornamental shrubs with areas of turfing and seeding. A seating area surfaced in self binding gravel for staff and visitors complete with picnic tables and colourful recycled plastic benches finished the scheme.

In Staffordshire, the emphasis was on native woodland planting under-sown with a species rich wildflower mix supplemented by thousands of spring flowering bulbs. The natural water course through the site was diverted to a series of swales and ponds seeded with wetland wildflower and planted with aquatic plugs. Bat, bird and insect boxes were installed in the surrounding woodland.

Work will soon be completed at Ardley with avenues of lime trees lining the entrance, wildflower seeding to the breach channel and run off reservoir with native and ornamental shrubs surrounding the building. The trees to the entrance road proved a problem as the site is situated on bedrock which meant pits couldn’t be excavated. The solution of raised planters was put forward by Grace Landscapes Operations Director Nat Spencer. Various options were put forward to the client with EverEdge galvanised steel being chosen. The site is of geological and paleontological interest as, in 1998, the longest set of fossilized dinosaur tracks in Britain was uncovered at the bottom of the quarry in Oxfordshire where they had lain undisturbed for 168 million years. Running for up to 200 metres over the floor of the quarry, the footprints were among the last remnants of a lost world where dinosaurs roamed the muddy shores of an ancient ocean. Scientists from Oxford University’s Museum of Natural History completed a detailed survey of the footprints and the prints were covered and preserved. A model of the dinosaur which possibly left the prints has been created from recycled materials and stands proudly in the atrium of the ERF administration building.

Phase 1 at Battlefield near Shrewsbury is complete with 12 nr 50-60cm girth semi-mature Quercus robur, English oaks and some of the 31 nr 40-50cm Acer platanoides, Norway maples trees. Weighing in excess of 1 tonne, each tree had to carefully lifted into place. Wildflower seed was sown and aquatics planted in April as well as formal shrub planting around the car park. The second phase will be in November when the remaining trees and woodland shrubs will complete the scheme.