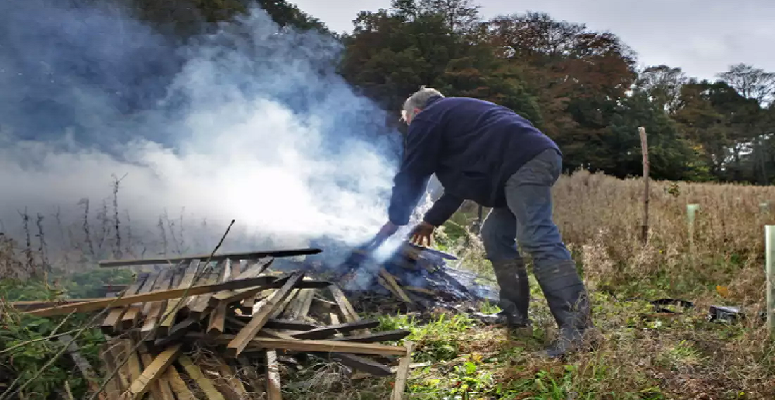 Officials tasked with stopping a disease that could wipe out a significant proportion of Northern Ireland’s trees are looking at giving up efforts at eradication. Instead, the Department of Agriculture, the Environment and Rural Affairs is considering simply recommending that Northern Ireland try to live with the disease as best as possible.

Patrick Cregg, director, Woodland Trust in NI The disease – called ash dieback – first appeared on the island of Ireland in 2012, after ravaging parts of continental Europe for years beforehand.

It afflicts all types of ash trees, which the Woodland Trust estimates make up about three-fifths of the trees in Northern Irish hedgerows.

It causes leaf loss and lesions on the bark, harms trees’ ability to transport water and nourishment, and ultimately kills them. In some countries, ash has been virtually eliminated in just a couple of decades thanks to the disease, which has no known cure.

English ash trees being burned in 2012, along with their leaves and even the stakes which held them in the ground, in a bid to contain the spread of the disease Ash dieback is fungus-based, and previously sites of infestation have seen trees and saplings ripped up and burned in an effort to control it.

However, DAERA has now told the News Letter: “Scientific opinion, and the evidence of the pattern of spread in continental Europe and Great Britain, suggests that continuing the approach of removing infected ash would not impede the further natural spread of the disease.

“The department invited the public to comment on a proposal, which it is currently considering, to change the focus of a compulsory eradication approach in favour of supporting owners to manage the impact of the disease in woodlands and to create woodland conditions under which any disease tolerant characteristics may emerge.”

It added: “It is not possible to state how many ash trees will be lost or how quickly.

“The disease has caused widespread damage to ash trees in continental Europe, where experience indicates that it can kill young ash trees quickly, while older trees can resist it for some time or until other endemic tree pests or pathogens attack the ash trees in their weakened state.”