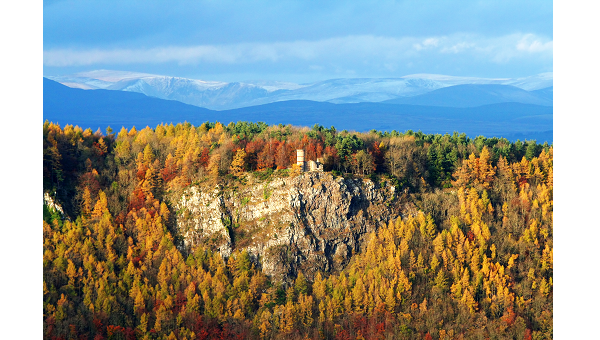 Scotland’s washout summer could lead to a £46million boost to the economy as tourists look to take in autumns colours.

Increased rainfall during June, July and August has created the perfect conditions for a particularly vibrant display this year, which is set to attract “leaf peepers” to Big Tree Country.

The heavy rainfall which made 2016 the fifth wettest summer since records began in 1910, mean trees have built up the sugars they need to produce the rich autumnal colours.

Morag Watson, of the Perth and Kinross Countryside Trust, said: “A growing season with lots of moisture followed by a warm, dry autumn is ideal for creating the most vibrant leaf colours.

“As this is the pattern of weather we have had over the last few months, we are expecting the autumn colours in Perthshire Big Tree Country to be very good this year.

“The foliage has blossomed earlier so the beautiful colours of the countryside will be on show sooner and for longer. Last year we had a fantastic autumn but, because it was quite a sunny summer, it came later. This year could be even better.

She added: “Leaf peeping is a tradition that originated in America.

“It means to take in the beautiful colours and scenery of different trees, plants and wildlife.

“Over 214,000 people from across the UK visit Perthshire from September to November and the autumn colours are a big part of the attraction. Together these visitors are estimated to generate over £46 million for the local economy.”

Jim Clarkson, of VisitScotland, said Perthshire was a hotspot for tourists looking to visit woodland areas.

“With more than 200,000 acres of woodland, Perthshire is rightly known as Big Tree Country and it never looks more stunning than when the leaves change to golden brown as we head into autumn,” he said.

“VisitScotland’s Visitor Survey, carried out in the summers of 2015 and 2016, highlighted the fact that 74% of visitors were attracted to Perthshire because of its scenery and landscape – compared to 50% nationally – and that 39% of visitors visited a woodland/forest area whilst in Perthshire.

“We are very fortunate in that beautiful autumnal scenes can be viewed right across Perthshire – in places like Loch Tummel, Killiecrankie and The Hermitage – and the extra visitors this brings in are a fantastic boost to the local visitor economy too.”