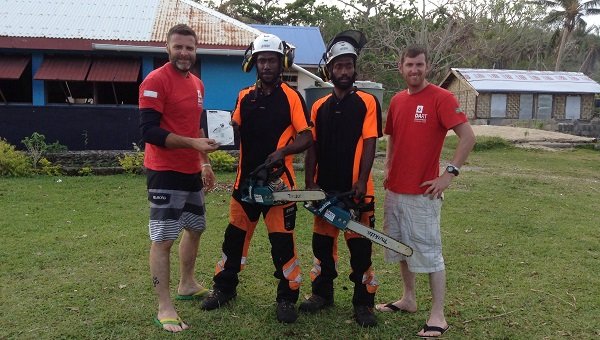 Support from national green services provider Glendale has enabled a humanitarian response charity to deploy a team of arborists to Vanuatu, after the south Pacific island was left devastated by Cyclone Pam.

The United Nations reports that thousands of fallen trees are blocking roads, downing power lines and causing flooding after Cyclone Pam tore through the island, killing 11 people and leaving at least 3,300 others homeless.

Glendale and Stein Products Limited have funded the cost of the trip and supplied equipment, such as chainsaws and ropes, to allow the charity to carry out its work. Glendale has provided ongoing support to the charity, including donations, sponsorship, IT and marketing support.

Glendale arborist Gary Bailey helped to set up DART International UK, which works to help make trees safe in disaster zones across the world, after witnessing first-hand the aftermath of typhoon Haiyan in the Philippines in 2013. He is travelling to Vanuatu alongside his DART colleague, Andy Macpherson.

Mike Metcalfe, operations manager for DART International UK, said: “Cyclone Pam is one of the worst storms to hit the south Pacific and the situation out there is incredibly serious. Aid agencies have said the conditions are among the most challenging they have ever faced, but our work should enable them to get much-needed supplies to the affected areas, and in particular the more remote areas outside of the capital.

“Another problem is that aid agencies have, with the very best intentions, set about clearing and burning fallen timber to create space. However, in doing so they risk injury and often overlook the economic value of the timber as a rebuilding material, or even as a source of income. As tree professionals, the DART team are aware of this value and try to preserve the timber for reconstruction work. All our volunteers are also trained to be self-sufficient which reduces the need to pull upon already stretched resources, and all have medical and survival skills.

“There is no shortage of essential work to be done in Vanuatu, and we are hoping we can send more volunteers out and extend our time there. However, we rely on funding and donations to be able to keep carrying out this work.

“I’d like to thank our sponsors, in particular Glendale and Stein, for their vital financial support and backing, and their generosity in mounting this operation to Vanuatu. Glendale was our first corporate sponsor and has given us a phenomenal amount of help which has allowed us to continue to carry out our work across the world.”

Terry Doyle, regional director for Glendale in the south west, added: “As a leading provider of arboriculture services in the UK Glendale understands that in any situation, having trained and experienced specialists on hand to help is important, but even more so when disaster strikes.

“DART’s work is helping alleviate some of the serious issues that occur when trying to get humanitarian aid in very quickly after a disaster has occurred and we hope that our sponsorship and support allows them to use their knowledge and expertise to help those affected by this terrible disaster.”

A report issued by the Vanuatu National Disaster Management Office has further highlighted the problems caused by fallen trees blocking roads and vital infrastructure, as well as the urgent need for chainsaws.

Donations to support the continuation of the project can be made at https://www.justgiving.com/dart-international-uk/, or by texting TDSXD04 £5 to 70070.