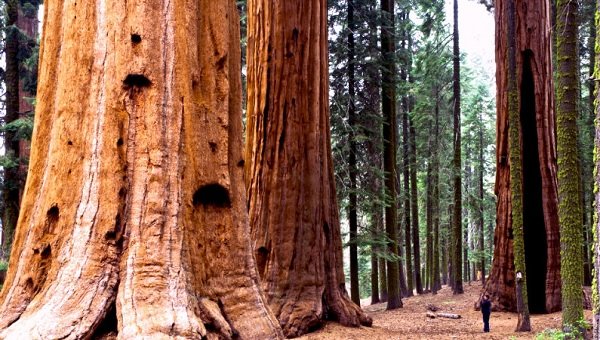 As a collaboration between the Eden project and the Archangel Ancient Tree Archive (AATA), 100 coast redwood clones (sequoia sempervirens) were planted in Cornwall last month. The parents of these clones are the oldest and largest living things on Earth with a full height of over 350 feet and an lifespan of up to 2,000 years.

Born in groves and raised in labs, the giants-to-be are the products of science and conservation. Co-founder of the AATA, David Milarch, hopes that new forests like these will provide an innovative and fresh store for increased atmospheric carbon.

‘Redwoods store CO2 faster and more effectively than almost any other species of tree on Earth,’ says Milarch. ‘We would like to pick a dozen countries to plant these trees as models of carbon sequestrian groves.’

A study by Oxford University concluded that trees are still the best ‘Negative Emission Technology’ (NET) – a technology with the potential to remove carbon dioxide from the atmosphere. However, the neutralisation of other large carbon sinks, such as the Amazon, fosters the need for increased reforested areas to offset more carbon emissions. Today, only five per cent of ancient Redwood and Sequoia growths are left standing.

Cornwall’s mild and often foggy climate is perfect for the growth of the redwoods. The giants rely on fog for up to 40 per cent of their water intake, a resource that thins as California’s temperatures rise. ‘The climate here in Cornwall is what this species of tree has thrived in for several millions of years,’ explained Milarch. ‘That climate is not available anymore in California anywhere for this tree.’

Unlike seedlings which carry two sets of parent DNA, the cloned saplings carry the genetic fingerprint of a single tree. These were retrieved by taking cuttings from the higher, fast-growing tips of branches or from sprouts of the felled tree stumps. The samples were then ‘spliced’ onto roots of stock redwood saplings or dipped in hormones to be bedded in peat or agar. The resulting offspring are a full genetic match to the original ancient tree.

‘These 100 saplings have been taken from the 100 biggest redwoods, and the idea is that they form a living library,’ explains Sir Tim Smit, co-founder of the Eden project. ‘In as little as 20 years time – as they grow about ten foot a year when they get going – you will be able to start to see them peeking well above the landscape.’

The Archangel Ancient Tree Archive hopes to reforest the planet with clone saplings propagated from some of the world’s oldest growth trees before they disappear. The first sapling planted in Cornwall bore the genetic fingerprint of the Fieldbrook stump, a 3,500 year-old tree which was felled in 1890. Had it been left standing, it would probably be the tallest tree in the world.

‘If we could broaden the timeline – instead of just looking at our lifetime or the moment – and designed things more intelligently like this tree does, I think it would be far better off for our grandchildren and beyond,’ says Milarch.