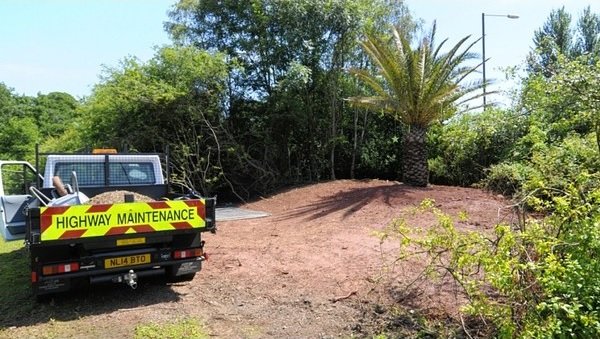 Torquay’s controversial gateway palm tree has been uprooted to a new location to make way for bypass roadworks.

The three-tonne tree was unexpectedly moved from Kerswell Gardens roundabout to a new position at the Brownsbridge Road and Riviera Way junction last Thursday evening.

The palm’s new home will only be temporary while the new South Devon link road is complete.

Once the road is finished in December 2015, it will then make its final journey to its permanent position where the new ring road meets Hamlin Way.

The moving operation was carefully planned according to Torbay Council but it was unable to reveal costs involved.

The palm courted controversy when Torbay mayor Gordon Oliver had it shipped to the Bay in autumn 2012 at the cost of £7,000.

Dubbed ‘the pineapple’ by locals, the tree was part of a £20,000 ‘gateway’ improvement scheme at Kingskerswell at the time. On Thursday, a crane lifted the Spanish palm into its new home while a team of workers looked on and road diversions were set up. In a statment, the council said: “This was carried out in the evening to minimise disruption to traffic.

“The five-metre palm will remain in its current position until the Torquay end of the new link road is finished.

“Work will get underway over the summer to refigure the Kerswell Gardens roundabout so it can accommodate a 750-tonne crane to install bridge beams for the new Torbay Ring Road underbridge, which will cross the Torbay rail line.

“The temporary roundabout will remain in place until next year when it will be replaced by a new junction.

“The planned new junction with the link road and Hamlin Way will become the new gateway into Torbay.”