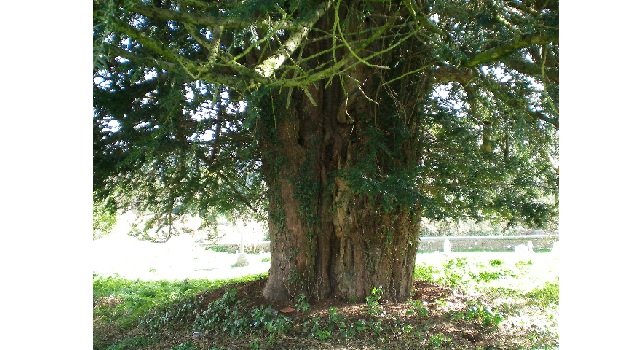 The brooding presence of a mature yew tree with branches that droop to the ground, covered in glossy dark green evergreen needles casting deep shade where little else can grow.

Recently the Royal Horticultural Society has had the good fortune to purchase the vacated Harrogate Arms Hotel that lies just beyond the RHS garden. Over the coming years the hotel will finally be re-united with the garden and hopefully two very fine yew trees will be revealed.

What sets yew, Taxus baccata, apart from other trees is extreme longevity as well as the myths and theories that have become attached to the tree over time, particularly to do with death. All parts of the plant are toxic except the red aril that surrounds the seed. Yew contains a powerful, poisonous alkaloid harmful to grazing cattle, although strangely not to sheep and goats. The poisonous extract was reputed to be used by Celtic warriors to tip yew arrows. Yew wood has long been used to make weapons using the strength and elasticity of the wood for deadly purpose. Most people are more than familiar with the story of the French defeat at the hands of English bowmen, even if the bows were made from imported Spanish or Italian yew. That the tree has a long human history is confirmed by the oldest wooden artefact a yew wood spear 250,000 years old found in Clacton in Essex

More remarkable though is the long and ancient association between the yew and churchyards. There probably isn’t another tree species that has such a unique place in folklore surrounding places of worship and the association is a long one as most ancient yews are only to be found in churchyards. In fact yew can claim to be the oldest living plant in the country as remaining trees in churchyards in Powis Wales and the famous Fortingall Yew in Perthshire Scotland are estimated to be anywhere between 2,000 and 9,000 years old.

It is the tew trees relationship with churchyards, with burials and Christian ritual that brings about the strong myth, superstition and legend surrounding the tree. Some theories have it that the planting of yew in churchyards is a symbol of immortality linked to the evergreen nature of the tree. Others believe that the yew has mystical abilities to ward off evil spirits and thereby protect the dead. Some say that the reason for the yew in churchyards is much simpler as it is enclosed and protects grazing animals from coming to harm.

Today, however we live in less superstitious times but even now the modern day use of a drug, synthesised from the chemical extract from Yew clippings and used to treat certain forms of cancer seems miraculous. The power to kill and now cure, maintains the reputation of yew as a remarkable, secretive and mysterious tree.