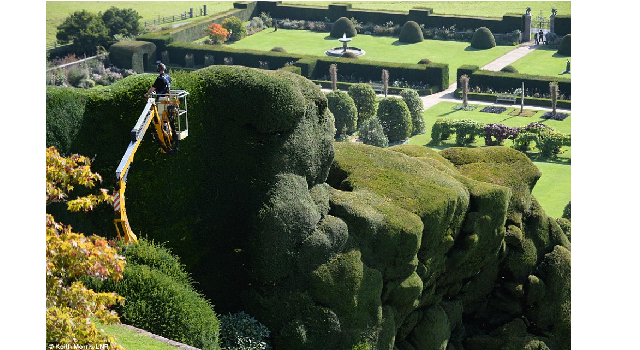 Balanced high above the ground on a cherry picker, powerful hedge-cutter in his outstretched arms and dwarfed by a tree many times his size, this gardener looks like he’s got his work cut out.

But it’s a far from daunting task for David Swanton, head gardener at Powis Castle in Welshpool, mid Wales, for he and his team gather every year to give this magnificent 300-year-old, 46ft tall yew tree its yearly trim.

The job has been made much easier by the introduction of easily-manoeuvrable cherry pickers that have replaced the cumbersome and hard-to-move wooden ladders of old, meaning a job that used to take many months now takes mere weeks.

And when the team do get a chance to take a break, then the views from on high are certainly worth savouring.

The centrepiece of the National Trust tourist attraction is the magnificent castle that was originally built in 1200 as a medieval fortress.

But it’s often the magnificent gardens and greenery that draw the most gasps – vast hedges, magnificent borders that grow on a slope – giving the impression that they’re hanging in the air – and the enormous yew hedges that have grown to such an extent they’ve formed a tunnel that visitors can pass through.