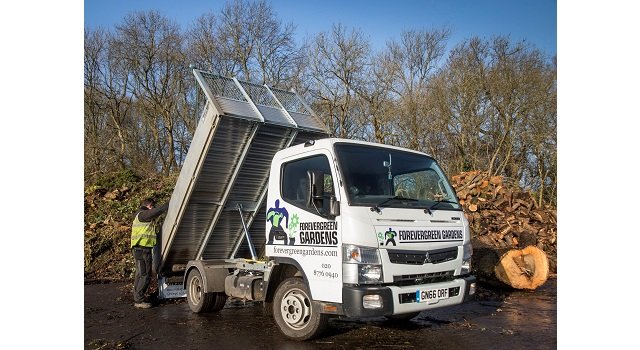 Forevergreen Gardens boss Richard Brown was so pleased with his first 3.5-tonne FUSO Canter tipper that when the time finally came to replace it he had no hesitation in returning for a second.

The company primarily serves customers within the south London borough of Bromley. It provides a broad range of horticultural, arboricultural and landscaping services, covering everything from day-to-day maintenance to a complete re-design.

The new truck was supplied, like its predecessor, by Mercedes-Benz Dealer Sparshatts of Kent – the German manufacturer’s franchised network is also responsible for sales and support of the popular FUSO light truck range.

A Canter 3C13 model with Comfort day cab, the new vehicle is powered by a fuel-efficient 96 kW (130 hp) 3.0-litre engine which develops an impressive 300 Nm of torque at low revs. Its tipping body, meanwhile, is by TGS Group, of Bristol.

Key to the appeal of the Canter at 3.5 tonnes gvw is its robust design concept. The vehicle is as compact and manoeuvrable as a van, but – thanks largely to its ladder frame chassis – as tough and practical as a small truck.

Mr Brown founded Forevergreen Gardens in 2003 and holds a number of gardening-related qualifications. He ran his previous vehicle for five years before Sparshatts took it back in part-exchange against the new Canter.

“My old truck was bullet-proof,” he recalled. “Our work takes us onto some rough sites at times, with plenty of mud and ruts to contend with. Yet it never gave me any problems at all.”

The Canter is used to carry and tip general garden waste, and Mr Brown regularly makes full use of its payload potential. “Most 3.5-tonners are based on vans, but the Canter is a proper little truck and built to take plenty of punishment,” he continued. “It’s just a great all-round tool.”

The vehicle came with a fuel-saving engine stop/start system – “I don’t monitor the diesel consumption but the new truck is definitely more economical than our last tipper,” he reported.

“It’s also a lot more comfortable. Good though it was, my old truck bounced around a bit. The latest Canter has a new, air-sprung cab, which I really like. It’s a lot smoother, so much so that even my wife will ride in it!”

Mr Brown took advantage of a highly competitive finance offer to acquire the new vehicle. “I was very pleased with the deal, and with the excellent service from Sparshatts’ FUSO Canter sales executive Ashley Shilling,” he added.