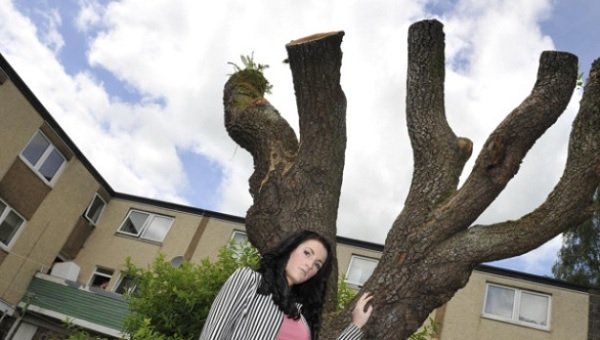 Residents of flats in Galashiels’ Church Square are angry after workmen hacked limbs off what the residents claim is a 500-year-old pear tree.

It was Church Square resident, Mrs Abby Keay, who contacted The Southern after tree surgeons hired by Scottish Borders Housing Association (SBHA) appeared last week and started slicing branches from the large tree, which sits in a small communal garden

“A pear tree more than 500 years old has just been destroyed in our communal garden, without any discussion or with regards to the neighbours that love and grew up with the tree,” she told us this week.

“It has been around longer than these flats, but an SBHA maintenance officer took one look and said ‘it has to go’, all apparently because a neighbour complained about leaves going all over her washing!

“Then the SBHA officer claimed the wall separating the two properties was falling to bits – well let me assure you it isn’t. Some pointing would fix the loose stones with no damage to the beloved trees.

“Myself and my neighbours, who own the flats, weren’t even asked if the trees could be just trimmed – we pay £400 a year for the cost of maintenance that doesn’t even get done due to so-called new contractors. But one person complains and the next thing you know a beautiful 500-year-old tree is destroyed.”

However, a spokesperson for SBHA said the organisation took special care when it came to protecting trees and where possible always tried to retain them.

But the spokesperson said the wall in question badly needed repairs and the tree had to be cut back, along with a hedge, to allow workmen access.

“As explained to local tenants, the wall is 200 years old and adjacent to the A7 and requires structural works to be carried out,” the spokesperson told us.

“Following confirmation that the tree did not have a protection or preservation order, we had it removed by a professional tree surgeon to allow structural inspections to be carried out on the wall.

“We appreciate that local residents may have concerns, but at times we need to balance the wishes to preserve the tree against the responsibility of ensuring the wall is in a safe condition.”

Fencing is now being erected on the site to ensure the safety of residents.