Fury as 75ft tree in Bedhampton is destroyed after builders’ blunder 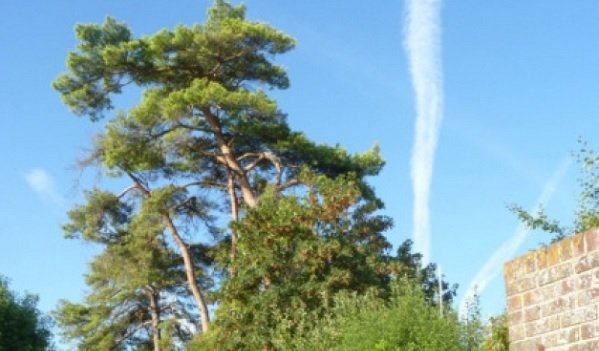 The felling of a 75ft protected tree after it was damaged by developers has caused outrage.

Neighbours are angry after a huge Scots pine tree – thought to be up to 80 years old – was taken down after contractors severed roots while working on a new housing development in Scratchface Lane, Bedhampton.

And they say the developer got away with a slap on the wrist after Havant Borough Council issued Crayfern Homes with a formal caution.

Neighbours say the developer should have been fined.

But councillors have defended the council’s position, arguing the authority has got the best outcome for residents and taxpayers by getting the developers to plant four new 20ft-high Scots pines.

The felling is the latest complaint from residents, who are already angry over noise, mud and dust from lorries visiting the building site.

Jim Graham, chairman of North Hill Bedhampton Residents’ Association, said: ‘It’s a disgrace. It’s sending out all the wrong messages to other developers who see a tree as a nuisance. They sever the roots, the tree has to come down – their problem is solved.

‘We fought hard to have trees on the site protected and we thought we had the backing of the council by having the Tree Protection Orders.’

The maximum fine for destroying a protected tree is £20,000.

In a letter to residents, Chris Murray, the council’s service manager for planning development, said it was ‘clear that the construction works carried out have caused significant damage to the tree which has left it in a dangerous condition’.

He said the council ‘carefully considered’ the options and had taken legal advice.

The council’s arboriculturist concluded the tree was deteriorating and only had a life expectancy of around five years. Mr Murray said: ‘Any fine, if secured would be likely to be small.’

He added: ‘It is considered that the issuing of a formal caution to Crayfern Homes is a proportional response in this situation.’

That’s the message from long-serving Bedhampton Councillor Ken Smith, who does not believe Havant Borough Council has shied away from getting tough with the developers.

The council initially refused the housing development, but following Crayfern’s planning appeal to the government, the authority was forced to grant approval.

He said the council could have taken Crayfern to court, but it would have cost taxpayers money and the court could only have ordered for one replacement tree.

He added: ‘As far as I am concerned we have done all we could within the law to stop this development. We were overruled and we have to manage the situation as best we can. I believe by getting Crayfern to plant four new trees it’s much better than paying for a court case and getting one tree.’