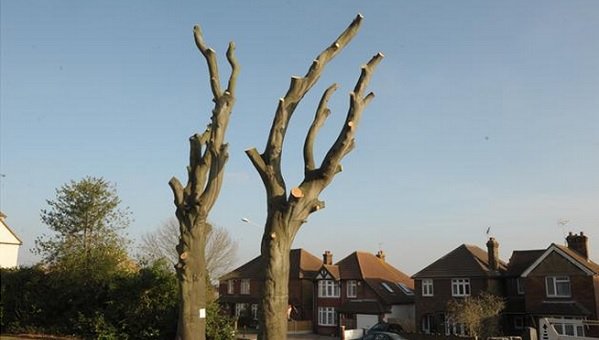 Two beech trees which were saved from the chop more than three years ago have been felled.

More than 100 people signed a petition in 2011 calling on Kent County Council to re-think its proposal to axe the 80-year-old trees at the entrance to New House Youth and Sports Centre in Chalkwell Road, Sittingbourne, so it could enlarge the narrow driveway.

People living in the area said if the plans were given the go-ahead it would be like “cutting down part of Sittingbourne’s history”.

There were also fears the alterations would increase parking problems as it would reduce the number of parking spaces on either side of the club’s entrance.

Residents who objected to the proposal received a letter from KCC shortly afterwards, telling them the application was withdrawn on April 21, 2011.

Then, in January last year, a fungus was found on one of the trees, causing it to become unsafe.

Remedial work was not an option and permission was granted by Swale council to remove it.

Eight months later, fungus was found on the second tree. Another application was made to fell it, granted last month.

To minimise disruption to the area, Swale council delayed felling the first tree so both could be done at the same time last week.

A spokesman said: “Permission was granted on the condition that replacement trees would be planted.

“The replacement trees must be small-leaved lime trees, and planting will likely take place next month.”

Angela Maybourne, who lived in Chalkwell Road until September last year, was one of the supporters of the original campaign.

The 52-year-old, who now lives in Staplehurst Road, said: “I’m disappointed they’ve gone, but pleased they will be putting something back there.

“Unfortunately, they won’t be as big and beautiful as those that were there.

“They’ve left a big gap and you can’t replace history. But they said they were diseased, so there was nothing we could do.”