Fresh bid to save future of Birnam Oak 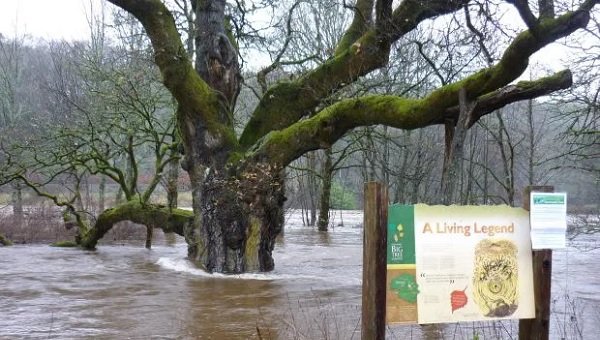 Emergency work was recently carried out on the centuries-old Birnam Oak, one of the only survivors from the ancient Perthshire forest immortalised by William Shakespeare in Macbeth.

Now conservationists have mounted a new campaign to safeguard its long-term future.

The Perth and Kinross Countryside Trust, which commissioned the initial restoration plan, needs to raise tens of thousands of pounds for further work.

A spokeswoman said: “Although the tree is now stable in the short-term, a further £100,000 of work is needed to ensure its long-term future.

“This work will include replacing the rotting props currently holding up the tree’s heavier branches, dealing with the soil compaction and drainage issues around the tree’s roots and protecting the soil around the tree from further floods.”

The soil was badly damaged when the woods flooded during Storm Desmond earlier this year.

The new appeal is a joint effort between the trust, the Friends of Birnam Oak and the Dunkeld and Birnam Tourist Association.

The main problem is that the trunk is hollow and it is being pulled apart by its heavy, ever-expanding branches.

The work, carried out in June, involved trimming back some of the tree’s branches.

Mr Hanson said: “Biologically, the tree is in great shape and it looks absolutely terrific from a distance.

“Unfortunately, the structural timber has been eaten away. There’s a number of interesting fungi which is doing its best to eat it.”

He added: “The bigger it grows, there is a danger that its going to overload itself and collapse.

“It’s not just the fact that it’s hollow, the problem is the extent of decay combined with how much of the timber is missing.”

He said the hollow inside the trunk was about 13ft. “But it has decayed further than that,” he said. “It’s almost like it is a giant mushroom, waiting to fall over.”

Mr Hanson added: “This is not a problem that’s entirely fixable, that we can help it stand up and it may even stay in place for another 400 or 500 years.”

In Macbeth, the huge branches of trees in the Birnam Wood are used as camouflage by soldiers as they advance on the Scottish king.