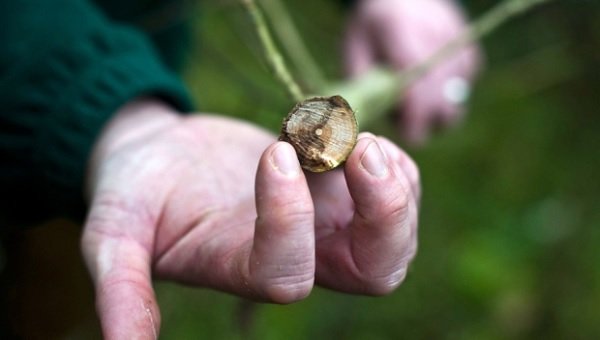 Sites in Scotland infected by a deadly alien fungus that threatens to wipe out 10 million of the nation’s best-known native trees have quadrupled in two years.

Ash dieback disease, or chalara, originated in Asia but is now widespread across continental Europe. It causes leaf-loss, crown dieback and bark lesions, and is usually fatal.

The disease is so far confined to eastern areas of the country, but experts believe it is unstoppable and will inevitably spread throughout Scotland.

“It is clearly spreading, but we haven’t yet got enough data to say whether Scotland is going to be any worse hit than the rest of the country,” she said. “Very little can be done now that the disease is actually here because it is wind-spread. It is quite hard to contain.

“We have lost the majority of our elms due to dutch elm disease, and we could have the same sort of impact with ash.”

She also warned that dozens of plants and insects depending solely on ash were at risk of disappearing, while the habitats of around 1,000 other species, including red squirrels, are under threat.

“Even more worrying are the wider impacts,” she said.

“There are mosses, fungi and insects that only use ash trees, so if we lose the trees, 45 other species could potentially be lost.”

Forestry Commission Scotland has set up a “sheltered area” bordered by a “buffer zone” in the hope chalara’s spread can be limited.

Scottish Green MSP ­Alison Johnstone said the new figures are “a real concern”. She said: “We need to hear from government what extra efforts can be made to protect the woodlands and forests so important for leisure and our economy.”

But Scottish environment minister Aileen McLeod said the latest findings are “unsurprising” and only highlight why major control measures are “ineffective” and “counter-productive”.

“We know that older trees can survive for many years with the disease and that a proportion will survive – and these are the ones we hope to identify over the coming years with a view to finding what is conveying that resistance and how it can be utilised for breeding future generations of resistant ash.”

The UK government has £16.5 million for tree-health research, which includes finding resistant trees rather than trying to cure the disease.

However, Dr Mitchell warned that resistant specimens would remain vulnerable to other diseases and pests that it is feared may hit the UK in future.