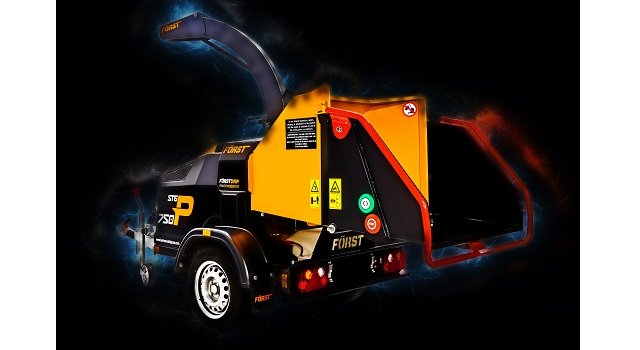 Först, one of the UK’s leading manufacturers of high performance and robust woodchippers, is set to showcase its complete range of wheeled, tracked and PTO machines, including the new ST6 P petrol model, at this year’s Confor Woodland show at Longleat Estate.

The ST6 P, Först’s first sub 750kg woodchipper, was launched to the UK market earlier this year and is an extension of Först’s popular range of six-inch capacity machines. Powered by a 37hp V twin petrol engine, the compact and lightweight woodchipper matches the strength and performance that users have come to expect from Först’s diesel powered machines.

Visitors to brand’s stand will be able to get hands on with the product and talk to the Först experts to discuss the benefits of switching over to a petrol machine.
Also on stand will be Först’s XR8 Traxion, an 8” x 10” tracked machine that can traverse banks due to its parallel linkage system, its original ST6 wheeled woodchipper and its high performance PT8 machine, alongside the ST8, TR6 and TR8 models.

Doug Ghinn, director at Först, said: “We are very passionate about the Först brand and how far we’ve come within the industry in such a short period of time. The diverse line-up of machines we’re exhibiting at Confor Woodland demonstrates this, as we now offer the complete range of woodchipper solutions to arborists, farmers, contractors and landscapers.

“The response we’ve had to the ST6 P suggests it’s going to be our most popular machine to date, offering the same power, performance and durability Först is known for, but at less than 750kg and using a petrol engine. As an industry heavily dominated by diesel, it’s been very satisfying to prove that there are credible alternatives as we gear up to Stage V in 2019.”

For more information on Först’s high performance range of woodchippers, or to book a demonstration, visit www.forst-woodchippers.com or call 01264 721790.
Alternatively, follow Först on Twitter (@ForstChippers) and Facebook (www.facebook.com/ForstChippers/).